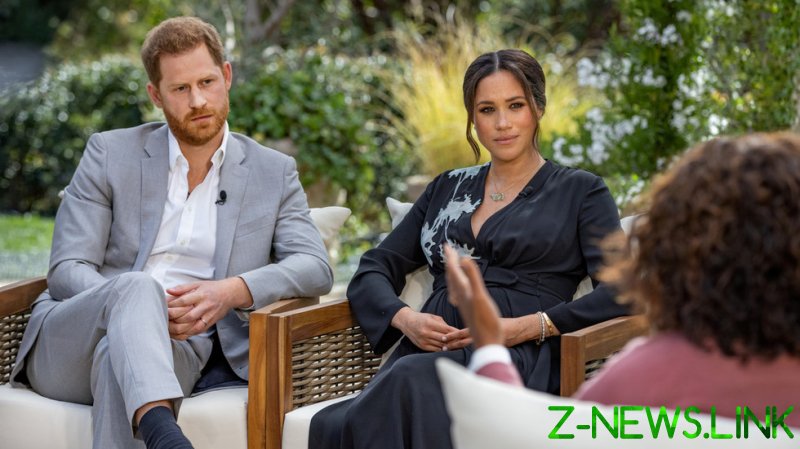 Last night I debased myself, as did millions of others, by watching the much-hyped Oprah Winfrey interview with Prince Harry and Meghan, the Duke and Duchess of Sussex.

The fact that mindless proles like me tuned in to watch a billionaire interview two millionaires about how hard their life has been is the most absurd thing imaginable. Yet, here we are.

The sit-down in Santa Barbara was billed as a major scoop, as it was the first time that Meghan and Harry have spoken out since their very public spat and split from the royal family.

The British monarchy is the longest-running soap opera in human history, and no doubt many tuned in hoping for some salacious details relating to the royal rift.

Unfortunately, this interview felt like when Geraldo Rivera opened up famed mobster Al Capone’s vault on live television and there was nothing in it. In this case, Oprah opened Meghan and Harry’s heads, only to find a cavernous void.

This event was all sound and fury, signifying nothing, and felt more like a manufactured PR enterprise mixed with a high school gossip session rather than a journalistic endeavor.

The basic takeaway was that Harry and Meghan shamelessly threw the entire royal family under a double-decker bus in an attempt to play the victim and boost their woke credentials in Hollywood.

I am not a fan of the royal family at all. I find them all to be arrogant aristocratic oligarchs, vicious colonialists and pompous, entitled inbred buffoons. And yet my impressions from this interview are that Meghan is a self-serving, petulant, ambitious, adolescent, controlling, manipulative and abusive shrew that has successfully estranged her husband from his family. And that Harry is a royal eunuch whose masculine crown jewels are kept tightly locked up in Meghan’s purse.

People will either believe Meghan and Harry’s harsh yet egregiously unspecific accusations of the royal family’s cruelty, indifference and racism, or they won’t. It would have been nice to have an interviewer who actually held their feet to the fire and put their claims under scrutiny to help viewers decide.

Oprah has always been more P.T. Barnum than Edward R. Murrow, and her patty cake ‘interview’ with Meghan and Harry was all socially distanced hugs devoid of insight.

What was so frustrating was that there were ample opportunities for some actual truth to be revealed, but Oprah, who is not only friends but business partners with Harry and Meghan (they are co-producing an Apple TV documentary together about mental health which is currently on hold), never pressed the couple for answers when they were being evasive, which was often.

For instance, Harry and Meghan both claimed that a royal family member had raised concerns about the potentially dark skin tone of their then-unborn child Archie.

Meghan demurred when Oprah asked who said it, and then when Harry was questioned he said he was “not comfortable sharing” the guilty party because it would be very damaging to them.

A real journalist would have pressed the issue and made clear that by refusing to name the person who allegedly said it, Harry and Meghan should be assumed to be making the story up.

Racism was brought up numerous times throughout, most notably in regard to the British tabloids’ mistreatment of Meghan. Harry and Meghan claim, and Oprah obviously agrees, that the only reason the tabloids picked on Meghan was that she is of “mixed race.”

The problem with this accusation and assumption is that there is strong evidence to the contrary, which was brought up in the interview. Namely, Harry voiced his concern that what the tabloids did to his mother Diana would happen to Meghan. The tabloids savaged Diana. They did the same to Charles and Camilla and virtually any and all major players in the royal family. The tabloids are awful, but to everyone, not just “mixed race” royals who are Americans, actresses and divorcees.

It seems quite obvious that what has happened with the royal family is that Harry and Meghan wanted special treatment, while everyone else thought it strange that they should be treated any different than any other royal, who all had their time in the unpleasant tabloid barrel.

What I find endlessly amusing is that Meghan and Harry wanted out of this scorching spotlight, so in search of the simple life, they moved to Hollywood, and set up a production company and signed deals with Netflix and Spotify and did a much-hyped interview with Oprah. They just replaced one delusional cesspool for another, albeit sunnier, one.

If Meghan and Harry are tired of the drama, why do the interview in the first place? They weren’t setting the record straight talking to Oprah, they were trying to settle some scores, and that will no doubt only lead to more tabloid drama.

The royal family is a walking tourist trap because it is a reality TV show, and so the vacuous Kardashian-style drama is completely the point. Without the endless, mindless, manufactured Sturm und Drang, the royal family, including Harry and Meghan, are entirely irrelevant. And that can never be allowed to happen. So this Harry and Meghan interview is just another episode in the relentless soap opera known as the House of Windsor. Tune in next week for the royal response to all the scandalous allegations!