Home / Society / The Kremlin makes a mistake, wanting to perpetuate his triumph on 1 July 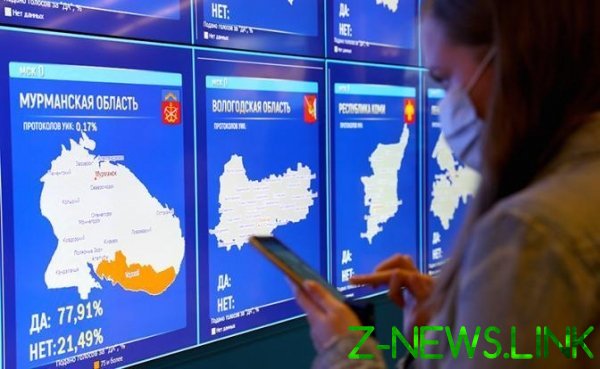 Epic edit of the Constitution, which allowed Vladimir Putin to remain President until 2036 (up to 83 years of age), received an unexpected continuation. July 1 — first day of voting on amendments de facto proposed to perpetuate. Member of the Public chamber, President of the National parent Committee Irina Volynets proposed to move on the 1st of July, the celebration of the Russia Day is now celebrated on June 12. The corresponding address it was sent to the head of state, and told them not anyone anyhow, and the Pro-government RT.

According to Volynets, June 12 many of the citizens of the country associated with the collapse of the Soviet Union, not with the independence of the country. But because the date of celebration of Day of Russia must be changed.

“Due to the fact that the vast majority of citizens of Russia approved the amendments to the Constitution… I ask You to instruct the Russian government to carry out a complex of actions required for the approval end date… a vote, July 1, the Day of Russia, of the announcement a national holiday and a day” — offers Wolyniec.

Wrote Lemonsfor a little bit reasonable Russian person another person from Russia is not a mystery. As we understand, the initiative is July 1, not born in the head Volynets itself, in a moment of intellectual insight. Just as the initiative to abolish presidential terms was not born in the mind of Valentina Tereshkova. The generator of such ideas, presumably, is the administration of the President of the Russian Federation. But I’m curious.

Initiative Tereshkova was purely applied character. According to one version, originally the Kremlin’s plan to extend the presidential term of Putin was to unite with Belarus. Externally, the plan looked like a Crimea 2.0 — we overcome geopolitical catastrophe of the 1990s, and are connected with the fraternal Republic. But, apparently, Lukashenko did not manage to persuade neither the whips nor the gingerbread, and before the New year-2020 it finally became clear.

So literally for the holidays in the presidential administration of the Russian Federation had to hastily write new version of the plan. From a beautiful script by collecting land nothing left, and the mountain gave birth to mouse: the nullification of presidential terms of Putin persisted with Tereshkova.

Initiative Volynets other properties — deeply symbolic. The day when Putin had the opportunity to practically life-long rule, should become a new point of reference for Russia and the correction point of the recognizing country epic of merit personally by Vladimir Putin.

It’s so naive, and so at odds with the political reality that inevitably there is an assumption that the true author of the initiative from July 1 — Putin himself.

— The starting point of the initiative statement by the press Secretary of the President Dmitry Peskov, the Kremlin voting results of July 1, “definitely consider it a triumph,” and that “de facto took a triumphant referendum about trust to the President”, — said Secretary of the Central Committee of the Communist party, doctor of political Sciences Sergei Obukhov. — So, the absolute triumph, and the pause after it was delayed. Many expected that Putin will, as befits a triumph, to sacrifice to the resignation of objectionable officials, at least. But nothing happens — and the pause burst of politically-active women from the Public chamber. Perhaps from the presidential administration have suggested to them: that triumph — let us mark it a red letter day.

“SP”: — What’s wrong with the current date of the day of Russia?

— The political content of this date — the day of victory of Boris Yeltsin over by Mikhail Gorbachev. Recall, 12 June 1990 the Congress of people’s deputies of the RSFSR adopted the Declaration about state sovereignty of Russia. Exactly a year later first President of the Russian Federation. President Yeltsin announced on June 12 the Day of adoption of Declaration on state sovereignty. In 2002, already under Putin, the official name of the holiday was shortened to the day of Russia.

Proposals to postpone the date came before. The Communist party, for example, offered the Day of Russia to declare July 28 — the Day of memory of Grand Prince Vladimir, the real founder of our centralized state.

I have in connection with the offer Volynets questions arise as to why the selected date is July 1, not July 4, when Putin’s decree amendments came into force? It’s more logical! Moreover, July 4, the U.S. celebrates independence Day — we could emphasize its dependence on the States. Recall, the preamble to the amended Constitution further preserved the primacy of us law — under the guise of international law over the Russian.

Come on, let’s move the Day of Russia on the 4th of July — and with the Americans will celebrate: they are the independence day, we — dependence day!

— I think, the farther, the clearer it will be to reveal the essence of voting on amendments to the Constitution. Just July 1, according to independent estimates, the citizens mostly voted against amending the Basic law. The lion’s share of votes in support of the amendments was received during several days of voting from 25 to 30 June — the period when they voted primarily dependent on the state budget.

Add to that the endless cases of fraud in voting July 1. In Klintsy Bryansk region PECs with even numbers showed a turnout of 91%, and with an odd — 90% is scarier than the traditional transcendent turnout in the republics of the North Caucasus! Moreover, similar stories with the vote on the Constitution — the car and small truck. It is no coincidence that for the first time in social media POPs up everywhere banner-suggestion: the vote was fair.

But to be honest — banners this is not convincing. So I want to ask: are you guys going to celebrate?!

“SP”: — the Kremlin will support the initiative Wolyniec?

— I think we are talking about a sounding of public opinion, not about punching a foregone conclusion. Surely Putin informed about the real results of the vote, and has no illusions about his “triumphalist”. I hope the President’s administration will be wise enough to shrug one’s shoulders about the nonsense with the celebration of 1 July to distance itself from that initiative away.

— July 1, do not turn in Day of Russia, because in this day there was a threat to Russian statehood thing, — said the Deputy of the state Duma of the third and fourth convocations, a retired Colonel Viktor Alksnis. The problem is that the quality of the vote on the Constitution questioned the legitimacy of the government. Every day is more evidence of massive fraud. According to the estimates of “Novaya Gazeta”, the amount of the fraud amounted to about 20 million votes, a record not only for Russia, but perhaps in world history.

In fact, we demonstrated that whatever was happening in the country, the government will get the desired result in any election. However, historical experience shows that questions which are not decided by ballots at the polling stations shall be decided by the protests. So, that now makes power is a serious mistake, which we all very costly.