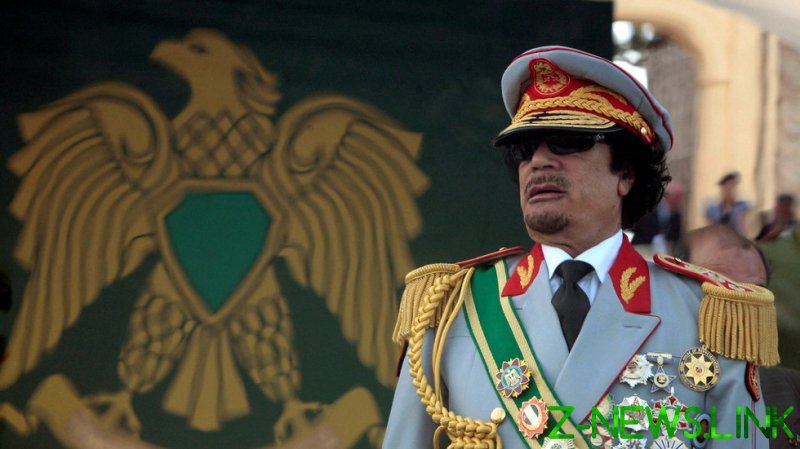 There was never really an ‘Arab Spring’ in Libya the way there was in Egypt or Tunisia. Protests were much smaller, and as time went on to show, the biggest players turned out to be extremist groups and foreign actors, each trying to get a slice of the country.

NATO’s bombing of Libya and support for rebels seeking to overthrow Gaddafi had little to do with wanting the country to prosper. Under the guise of ‘human rights’ and ‘democracy’, the Western military alliance helped murder one of the Arab world’s most prominent leaders in order to steal Libya’s resources and protect Western hegemony. Later on, as part of Operation Timber Sycamore, the CIA would find additional utility in Gaddafi’s ousting: funnelling Libya’s stockpiles of weapons and ammunition over to Syria to arm Al-Qaeda and other jihadist groups.

Seldom discussed in the news anymore, Libya has become a shadow of its former self, ravaged by 10 years of war and chaos. Hillary Clinton, Barack Obama and the other war criminals who orchestrated its destruction don’t want you to know how badly it’s doing.

From thriving nation to ‘failed state’

Known for his extravagance, Gaddafi boasted a security detail of female bodyguards, lavish outfits, and long, dramatic speeches. He also transformed Libya from one of the poorest countries on Earth into a rich, self-sufficient state, all while managing a tribal society in a country home to the largest oil reserves in Africa.

During his 42 years in power, he increased the country’s literacy rate from 25% to 88%. Libyans enjoyed free healthcare, free education, and a high standard of living. Basic necessities such as electricity and gas were cheap, and the country was guaranteed a strong social safety net and welfare programs.

Libya is 90% desert. Gaddafi sought to provide fresh water to all Libyans for consumption and agriculture – an endeavor in which he succeeded. He built the world’s largest irrigation project, the ‘Great Man-Made River’ in the 1980s. Boasting the world’s largest pipe network, it provides 70% of all the fresh water in Libya. Gaddafi called it the “Eighth Wonder of the World”. Costing over $25 billion, the project was entirely self-financed, without any loans or credits from foreign banks. Libya had grown to be a very wealthy country and had no external debt.

The United Nations’ Human Development Index provides a summary measure of health, education and income. In 2010, Libya was ranked number one in Africa, and 53rd out of 189 countries and territories. Today, its ranking has sunk from 53rd to 105th worldwide.

After the NATO-backed ‘revolution’, Libya has none of these nice things anymore. There are constant power cuts. The healthcare system has collapsed. There is no infrastructure. The standard of living has plummeted, and after 10 years, Libya doesn’t even have a functioning central government.

In March this year, a government of national unity was formed, after a ceasefire brokered in October 2020. While it has largely held until now, and elections are scheduled for December, infighting persists, and whether anything comes of this process remains to be seen.

Instead of an abundance of water, gold and oil in a thriving country with great infrastructure, Libya now has open slave-trade markets. Smugglers and human traffickers take advantage of migrants and refugees passing through to Europe, selling them off into bondage. Rival tribes and political factions fight over oil and other precious resources, determined to seize power for themselves. Meanwhile, pockets of Islamic State (IS, formerly ISIS), Al-Qaeda and other jihadist fighters lurk in the shadows, plaguing the war-torn country and its neighbors – groups who wouldn’t have dared establish a presence in Gaddafi’s Libya.

Once a prosperous nation, since his fall, it has been taken over by terrorists, opportunists and thieves, and has plunged into chaos. This is what has become of Libya these last 10 years. This is what NATO created.

One of Gaddafi’s best speeches was in 2008 in Damascus, at a meeting of the Arab League. Rebuking the violent invasion of Iraq, he offered Arab leaders a stark reminder of what befell Saddam Hussein, whom the US once considered an ally against Iran.

“An entire Arab leadership was executed by hanging, yet we sit on the sidelines. Why? Any one of you might be next.”

Chuckling at his words, other Arab leaders would have done well to take heed of Gaddafi’s warning, for, indeed, the US would come for Syria and Libya next. And just three years later, Gaddafi himself would be brutally killed at the hands of NATO-backed rebels.

Anti-imperialist, pan-Arabist and pan-African: Why Gaddafi had to fall

The late Libyan leader supported independence and national liberation movements right across the world, including groups such as the Palestine Liberation Organization, the Irish Republican Army, the Black Panther Party, and many more. In the 1970s, he tried to merge Libya with Egypt and Syria to form a unified Arab state. In 2009, he proposed that African nations adopt a single currency: the gold dinar. The Libyan Central Bank, which was 100% state-owned, had reserves of 144 tons of gold that he intended to use for this purpose. Gaddafi proposed that African countries buy and sell their resources exclusively in this new pan-African currency. This would enable them to transition away from the US dollar and the Central Africa (CFA) franc – a colonial currency used in 14 countries and controlled entirely by France.

This was Gaddafi’s biggest sin. In wanting African nations to adopt a single currency, to control their own resources and have true independence, he posed a threat to Western monetary hegemony, so he had to go.

Western governments were well aware of this plan. A look at the emails of then-US Secretary of State Hillary Clinton, show discussions around Gaddafi’s gold reserves and his plans for a single currency. It became clear to the West that African countries switching away from the US dollar or CFA franc, and controlling their own currency and monetary policy, would undermine American and French influence over Africa. It would weaken the Western monopoly over African resources and the international banking system, rendering neo-colonial institutions such as the International Monetary Fund less effective in manipulating developing nations.

Not that we needed further confirmation; but written clearly in those emails was evidence that this plan to provide an alternative to the CFA franc “was one of the factors that influenced President Nicolas Sarkozy’s decision to commit France to the attack on Libya.”

Sarkozy decided to bomb Libya because he knew full well that West African and Central African countries abandoning the CFA franc would minimise France’s sphere of influence over its ‘former’ African colonies and fulfil its “desire to gain a greater share of Libya oil production” – that is, plunder Libya’s wealth.

All this is a stark reminder that NATO couldn’t care less about protestors and the ‘Arab Spring’. Claims of “respect for democracy” were merely a cover story to protect Western interests and steal Libya’s resources, leaving the country in chaos and crawling with terrorists, just like Iraq and Syria.

Nothing could be more emblematic of how evil the entire affair is, than Hillary Clinton literally jumping for joy on hearing of Gaddafi’s demise, after he was brutally sodomized, lynched and executed by NATO-backed rebels. “We came, we saw, he died,” she said.

Killed for his success

Gaddafi was always a thorn in the side of Western colonial interests. His greatest ‘crime’ was wanting real independence, threatening US and French monetary hegemony, and the international banking system.

Now people look at Libya and label it a ‘failed state’, but Gaddafi’s Libya was not a failed state. It was Africa’s wealthiest and most prosperous nation – a thriving, flourishing state until the West deliberately destroyed it in 2011.

Apologists for Western imperialism love dismissing the achievements of other countries and labelling their leaders dictators, but the truth is, Libya was much better off under Gaddafi. It had oil, gold, water and resource independence.

History is littered with African, Arab and Latin leaders, killed by the United States, for daring to make their countries better and seeking to challenge Western hegemony. Gaddafi is no exception.

There is nothing the West hates more than an Arab leader who opposes imperialism, Zionism and wants his country, and other Arab and African countries, to be self-sufficient. That is why NATO murdered Gaddafi.