The judo champion was injured Putin 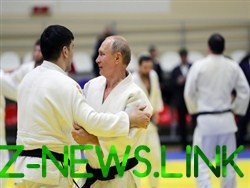 Vladimir Putin has damaged the ring finger during training on judo in the Olympic sports training center “South-sport” with representatives of the national teams in Boxing, judo and wrestling. About it reports TASS.

While sparring with Olympic champion Beslan Mudranov the President received a slight injury on his right hand, but after applying the usual patch Putin continued training. He held on the Mat for about an hour.

After the head of state left to practise techniques and throws, he communicated with the athletes. He said that judo classes will help them improve their mood and to look at the world without rose-colored glasses. “You look at life differently. Everything begins to work well, a comprehensive impact,” he shared.

Putin is engaged in martial arts since age 11, has the title of master of sports in judo and Sambo. In 2006 he became the honorary President of the European judo Union, and in 2010 received a diploma of “Doctor in judo” South Korean University ENIN. He has a black belt in karate.