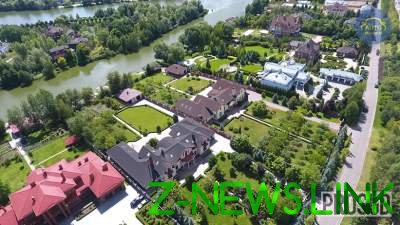 Journalists showed how the lives of the judge of District administrative court of Kyiv.

Head of Department of representation in administrative proceedings representation of management for the protection of the interests of citizens and state in court of Prosecutor’s office of Kiev Smityuh Vasily Antonovich is the brother of former people’s Deputy from Party of regions Grigory Smityukh and has a luxury property.

Basil Smityuh began his prosecutorial career in 1994. The longest Vasily Antonovich worked in the Prosecutor’s office of the Svyatoshinsky district of Kiev, where he came to several scandals.

In the investigation of the program “Our money” says that Smityuh, together with his family received several plots of land in Zhulyany. This is the land of 2010, the SBU has arrested on suspicion in illegal allocation of the families of judges, prosecutors and police land. In addition plots in Zhulyany, the Prosecutor also got the land in Koncha Zaspa. In 2003, the team of developers of the “South” has received in rent of 11.98 hectares of land in this elite place. Later this whole area is already privatized. According to media reports, a large amount of land privatized and the so-called group Smityukh. In particular, the section received the Prosecutor himself, his brother, the Deputy, their wives and other relatives or close friends.

In their declarations, 2015 and 2016 Smityuh declared 689 thousand UAH of income. His wife during that time earned only 95 thousand UAH.

But, despite such a low income, the wife is the owner of an excellent property of the Prosecutor’s family. Maria V. Smityuh owns a house in Kozin area of 173 sq. m.

But if the house is at least mentioned in the Prosecutor’s Declaration, the earth beneath him is non-existent. In fact the owner of both the land on which the house is located, also has a wife Maria V. Smityuh. The total area of all land under the estate 55 acres. This property by far had to be specified in the Prosecutor’s Declaration, and therefore this is another reason to believe that Vasily smityukh trying to hide their real incomes.

The Prosecutor owned only a house in Januzaj that in Kamen-Kashirskiy district in Volyn. The area of this house is 210 sqm and the stated value of the 261 thousand UAH.

Precious movable property also is owned by the wife of the Prosecutor. Maria Vladimirovna owns a Toyota Highlander 2011 release. Bought the wife this car for UAH 369 thousand in 2012.

The Prosecutor himself is more modest vehicle. He declared that only the Porsche 968 in 1992.

Despite this, the number of luxury movable and immovable property, the wife of the Prosecutor also declared that 320 thousand UAH in cash.