Home / economy / The index of the strength and weakness of the ruble: the rise of the dollar to 70 for the “wood” is inevitable

The index of the strength and weakness of the ruble: the rise of the dollar to 70 for the “wood” is inevitable 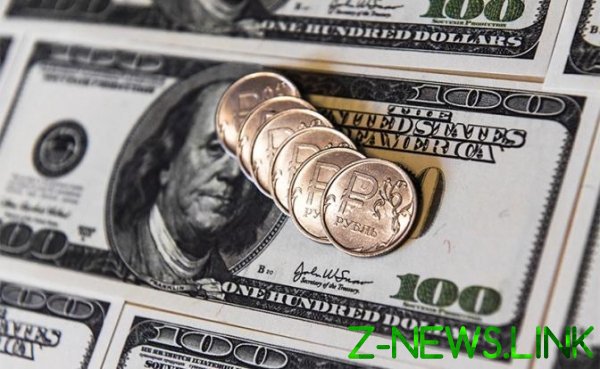 The Ministry of economic development downgraded its forecast for average annual ruble — to 66 rubles/dollar. This was announced by the head of Department Maxim Oreshkin during the governmental hour in the state Duma.

According to him, the Outlook change “is more to do with change in Euro/dollar, than with some internal factors”. Previously, the Ministry had forecast the rate to 63.9 RUB/USD. on average, 2019.

As you can see, . — the eternal optimist. Just as all the experts say, the Russian economy was on the verge of sliding down and a new wave of ruble depreciation. In particular, an interesting forecast was made in his blog, analyst, head of macroeconomic research “KAMAZ” Sergey Blinov.

“Now it (the index “Power rouble”) is close to the value of 3.23 is down a narrow corridor, in which the index is more than a year. If he comes over the border down, it can be considered a signal about the deterioration of the situation”, — said the analyst.

Pancakes also drew attention to the growth of ruble and foreign currency components, which are now rapidly increasing currency.

About a possible economic slowdown and the depreciation of the ruble warns one not pancakes. At the end of February the savings Bank has worsened the forecast of the ruble for the next two years — and he’s doing it for the second time in three months. According to the adjusted forecast, in 2019, the dollar will be worth 68,5 rubles in 2020 — 69 rubles. However, independent analysts believe that the Bank assumes in its forecast conservative scenario. So the event is likely to develop more dramatic.

First of all, the price of oil may not be too rosy. If oil prices decline, analysts believe that the financial authorities of the Russian Federation will not spend reserves to save the ruble. In this case, the jump rate can be impressive.

In addition, there is the factor of sanctions. They, with high probability, will be gradual and phased. But no one is immune from the fact that at some point the United States can impose an unexpected and painful sanctions by analogy with the 2018 year, when the Americans suddenly hit by Oleg Deripaska and RUSAL.

According to preliminary estimates, if the West will impose sanctions on the entire Russian debt, the Central Bank and the Ministry of Finance of the accumulation of reserves will have to send a few tens of billions of dollars in compensation to help banks that hold the debt securities, and the direct purchase of securities.

If against Russian state-owned banks will be introduced restrictive measures, this will require a more costly support from the state. In this case, monetary authorities may have to include the printing press, plus actively spend reserves.

What is behind the statement. and index of “Strength of the ruble”, that in reality waiting for the Russian economy?

“The power of the ruble” is one of many so-called leading indicators that predict the development of the situation in the economy, — said the head of a direction “Finance and Economics” Institute of contemporary development Nikita Maslennikov. — The basis of the indicator Blinov — dynamics of some monetary indicators: it is quite a normal approach. But there are other, more complex leading indicators. For example, SOY — a summary index, which is calculated as the Higher school of Economics, or leading indicators based on surveys of managers in selected industries.

What is more important: today, all the indexes it turns out that the situation in the Russian economy extremely unstable. Analysts are always making predictions from the “devil’s advocate”: what would happen to the economy under the worst case. Now, economic performance is even worse than these “devil” of the forecasts.

Notice reliable data for February on the economy yet. There are estimates for January, but it is believed that they can not fully rely on in analysis because a good half of January, no one in Russia does not work. However, certain feelings gives the January analysis, and these feelings are very uncomfortable.

“SP”: — What exactly are you worrying?

— First of all, very poor dynamics on the real income — they fell 1.3%, when compared year to year. While real wages rose literally of 0.2% is negligible.

Yes, inflation is more or less consistent with the projections of the Central Bank. However, for the first quarter of 2019 she probably will be selected close to 6%.

But the most unpleasant and controversial painting in its assessment of GDP growth. The Ministry of economic development assures that the economy grows with the rate of 0.7% – which already looks doesn’t matter. If you clear this indicator to seasonal fluctuations and calendar factors, and to compare with January 2018 — will be at all disappointing results.

For example, according to the chief economist VEB Andrei Klepach and his team, today there is a GDP fall of 0.2%.

Notice of the February assessment on two leading indicators, which I personally trust, is also not benevolent. This is an index of sales managers in the manufacturing industry it decreased by 0.8, and now is 50.1. Here it is necessary to understand the value of the index at 50.0, in this case the boundary mark, which speaks of stagnation, and below it begins the downturn.

There is also a consolidated index that includes various stock and financial performance. Including an indicator of the money supply, which counts Sergey Blinov. This composite index for the third consecutive month is negative. This indicates that in the short term — at least until the end of the second quarter 2019 — the revival of business activity, and changes in the economic situation for the better, not wait.

The result is that the most optimistic scenario for the Russian economy is stagnating. That is, it is at best an increase of 1% of GDP.

“SP”: — in these conditions will happen to the ruble?

— By far the ruble will weaken. He has no support from the steady pace of General economic growth. Plus, it remains a very volatile oil market that the national currency does not strengthen. Plus, the market remains volatile “hot money” investors shows a net outflow of capital. Yes, in January this outflow is small — about $ 110 million — but it indicates that the appetite for Russian assets is very unstable.

All of these factors pushing the ruble down, and the only question is: how much of the national currency will weaken. Very much you will notice depends on the sanctions news. In addition, the behavior of investors can affect the fate of the trade agreement, China-US and the position of the Federal reserve, which plays on the strengthening of the dollar.

As a result, by the end of the first quarter of 2019, the ruble may fall to 66.5 rubles/dollar. And then — yet — projected gradual decline. Not critical but it is only in the case, barring shocks — both in the area of sanctions policy, and global economy.