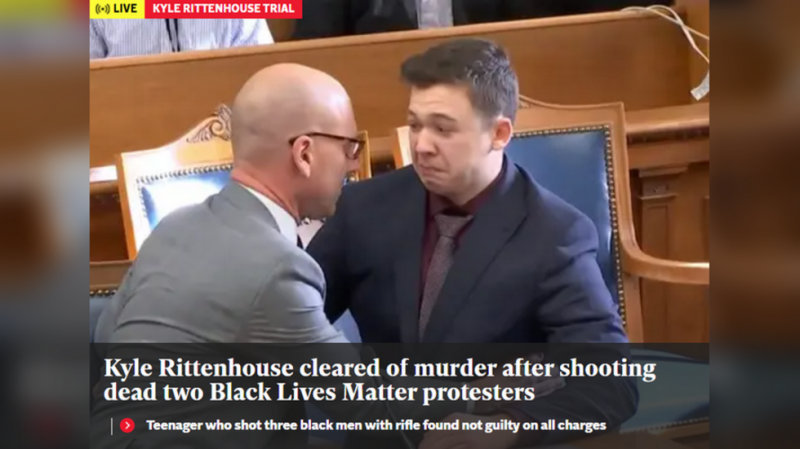 Shortly after a jury in Kenosha, Wisconsin found Rittenhouse not guilty of murder, attempted murder and reckless endangerment, The Independent updated its front-page live coverage of the trial with the headline: “Full story: Teenager who shot three black men with rifle found not guilty on all charges.”

The headline was false, as Rittenhouse was on trial for shooting three white men, during a ‘Black Lives Matter’ protest that devolved into a riot in Kenosha, Wisconsin last August. Rittenhouse shot and killed convicted child rapist Joseph Rosenbaum and felon Anthony Huber, both of whom attacked him first. He shot and wounded Gaige Grosskreuz, after Grosskreutz pointed a handgun at him, and the jury on Friday found that the teenager acted in self-defense in all three cases.

While the headline was taken down shortly afterwards, an archived version can still be accessed.

Rittenhouse’s trial was a media spectacle, and throughout the three weeks of testimony, arguments and deliberations, commentators watching the trial frequently hammered the mainstream media for painting a different version of events from the story actually playing out in court. Judge Bruce Schroeder also took the media to task from the bench on numerous occasions, calling coverage of the trial “scary” and “grossly irresponsible.”

The Independent’s readers weren’t the only ones misled into thinking Rittenhouse opened fire on three black people. In one tweet that went viral earlier this week, journalist Glenn Greenwald unearthed a tweet from a liberal commenter who said that despite being “highly educated and reasonably perceptive,” she only learned a week before the verdict that “the Kyle Rittenhouse victims were white.”

“My progressive bubble made this seem like a very different case than it is,” she added.