Home / economy / The idea of a liberal Nabiullina

The idea of a liberal Nabiullina 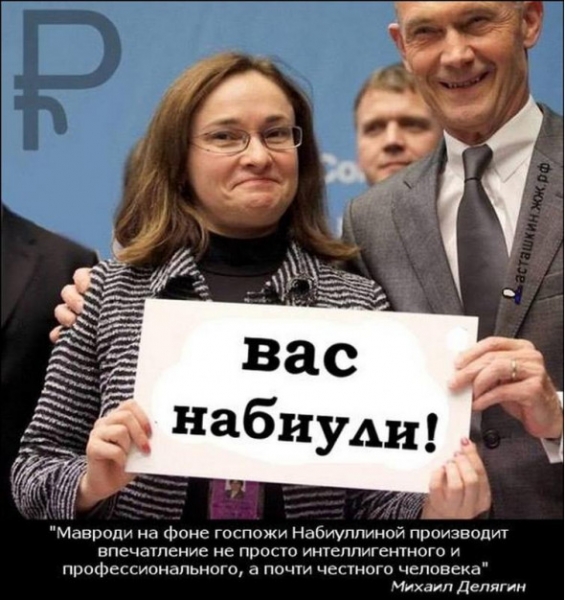 Nabiullina wants to deprive Russian citizens of the right to escape from the devaluation of the ruble: the preparation of a new robbery? 2
EVENTS

According to news Agency “Lenta.ru”, “foreign Currency deposits, together with some other types of savings can be recognized as investment instruments permitted for qualified investors only…

The relevant amendments to the legislation were discussed at a closed meeting of the Central Bank with financial market participants. Changes will be made in the form of a law on the division of investors into categories. It is also necessary recently told the head of the Central Bank Elvira Nabiullina, noting that therefore the government should protect certain groups of citizens from unnecessary financial risk.

The bill if it is introduced in the state Duma, may include two main instruments: foreign currency Deposit and Unallocated metal accounts (OMS).”

Mikhail Delyagin said: “as far As we can tell, the liberals of the Bank of Russia intend to deprive Russian citizens of the opportunity to escape from that they organize, including “out of the blue”, the devaluations of the ruble (it is worth Recalling that in 2014 the ruble has depreciated by half in a situation when Russia’s international reserves for the quarter exceeded the required internationally recognized criterion Reddy to ensure monetary stability at least, it is the devaluation was artificially organized and man-made).

See also:  Nabiullina speculate about the collapse of the ruble with dolls

Today a tool to serve foreign currency deposits – and that they should be allowed to all but certain “qualified investors”.

Assistance in selection of financial services/organisations
Loan for business with 0 accountability!
Get money without guarantors in MSK and MO. At 9%. 1 day! We are waiting for you!
Learn more
kreditvzalog.com

Of course, to keep money under the mattress, and the preservation of Nabiullina the Bank of Russia, it seems that soon will leave citizens no choice, but they are not charged interest (even low) there is a big temptation to spend it, and most importantly, they are available to the robbers. Perhaps the liberals are trying for the latter, rightly feeling their social proximity with them.

Essentially, that foreign currency deposits (their share in retail deposits now exceeds 20%) are an important factor in the stability of the banking system as a whole, as banks have an additional source of foreign currency.

Thus, the idea of liberal Nabiullina is, as far as we can judge, not only to once again Rob the population of Russia, making it vulnerable to another devaluation, and to increase revenue, robbing people criminals, but also to destabilize the banking system of Russia, with difficulty comes after it arranged itself under the guise of rehabilitation of a monstrous Bank of terror in the style of 1937.

See also:  Reva told how much working Ukrainians do not pay taxes

But the liberals, serving as global speculators against their people, are unable to limit financial speculation. Therefore, Nabiullina wants to discredit the very idea of such restrictions outright and mortally dangerous for Russia madness – just as Medvedev in August 2014 to discredit the idea of protection of national interests of Russia in the face of Western aggression their crazy counter-sanctions and the destruction of food.”
Read more on https://delyagin.ru/articles/183-sobytija/69477-nabiullina-khochet-lishit-grazhdan-rossii-prava-spasat-sja-ot-deval-vatsiy-rublja-podgotovka-novogo-ograblenija