The hit parade of the most anticipated smartphones next year 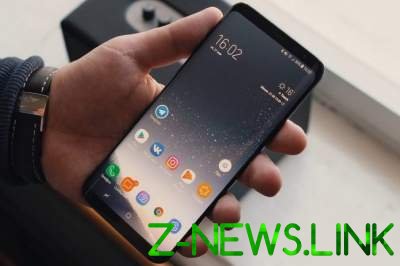 Next year promises to be quite eventful for the mobile market. In 2017, the producers experimented by stretching the display and changing the aspect ratio smartphones. Probably in the next year, the experiments will continue. So, we are waiting for more interesting devices. That’s what smartphones 2018 may be the most interesting.

The experts considered the Samsung Galaxy S8 best smartphone of 2017. It is obvious that Samsung is trying to keep the championship. Galaxy S9 will claim the title of best Android smartphone in 2018.

According to rumors, the device will be equipped with three-dimensional scanner face, the same as was equipped with a X. the iPhone Camera is able to record video with a frequency of 1000 frames per second. This is not enough to efficiently capture the bullet in flight, but enough to shoot effectively flying spray of water. It is also expected that the Galaxy S9 will get a large capacity battery.

Less plausible rumors reported about the fingerprint scanner, located directly beneath the display, and a modular design.

This year Apple made a little confusion with the numbering of the models, so it is difficult to predict whether the next iPhone be called the ninth. If the release of the three models will become a tradition, then next year we can see a set of iPhone 9, iPhone 9 Plus and, for example, iPhone X2. But there is the problem. Although users almost without exception called X iPhone “iPhone x”, the Tim cook insists that no “x” and the Roman numeral ten. And if so, then the numbering “X2” looks strange. In General, while the focus on the “nine”.

Early rumors claim that the next iPhone will have an OLED display and a set of sensors Face ID, just like the iPhone X. will the fingerprint scanner is not yet clear.

About LG G7 so far we know very little. However, something can be judged by the previous models. For example, the model LG V30 manufacturer refused to the LCD in favor of OLED. Probably this technology will be used in LG G7. This means its display is brighter than the LG G6.

LG G7 with the big share of probability will use the Snapdragon processor 845. Thus, the device will be able to compete with other flagships 2018. Recall, LG G6, released in the spring of 2017, was used not the current Snapdragon chip 835, and 821 last year’s Snapdragon, which greatly undermined his position.

According to rumors, next year we can see three new models Pixel the standard Pixel 3, Pixel large 3 XL and a premium model with a bigger display. Also, insiders learned the code names of the three devices – “crosshatch”, “albacore” and “blueline”. More information about smartphones to appear with time.

It is known that HTC U12 will receive double the camera. This was stated by representatives of the company. Also with high probability, the smartphone will receive Snapdragon processor 845. Active side faces that are sensitive to compression, well established in U11, so that from her company to get rid of will not.

Rumors claim that the Samsung Galaxy Note 9 will receive a fingerprint scanner built right under the display. As already mentioned, the emergence of such a scanner in the model Galaxy S9 is very unlikely, but with the Galaxy Note 9, the company may accept the experiment.

Another rumor claims that the device can receive a flexible foldable display. Samsung, really, more than a year working on the technology for foldable smartphones. Nevertheless, it seems much more probable that this experimental form factor the company will launch a separate line.

Design Sony Xperia XZ2 can be radically redesigned. The company can refuse your brand of rectangle with sharp corners in favor of something more streamlined. Otherwise, the smartphone will fully conform to the requirements of the flagship models in 2018.

Huawei P11 may be one of the first flagship smartphone of 2018. Most likely, it will use OCTA core Kirin processor 970, which we saw in the Huawei Mate 10. But the amount of RAM in smartphone can grow to 8 GB.

OnePlus 6 should be the next smartphone with the characteristics of a flagship and the price of the gadget middle segment. The technical characteristics are close to characteristics of 5T OnePlus, but the camera will be much better. The device can receive a 20-megapixel sensor and dual 6-inch display with an aspect ratio of 18:9.

Release date Nokia 9 is not yet announced but we can expect this smartphone at the beginning of 2018. According to rumors, the device will have a 5.5-inch OLED display, waterproof metal housing, dual 22-megapixel camera with Carl Zeiss optics and battery capacity of 3800 mAh.

If these specifications are confirmed, Nokia 9 may be one of the most interesting devices of the year. However, there is another depressing hearing. The smartphone can get Snapdragon processor 835. If so, then the performance he will give in to the majority of flagships with Snapdragon 2018 845 on Board.