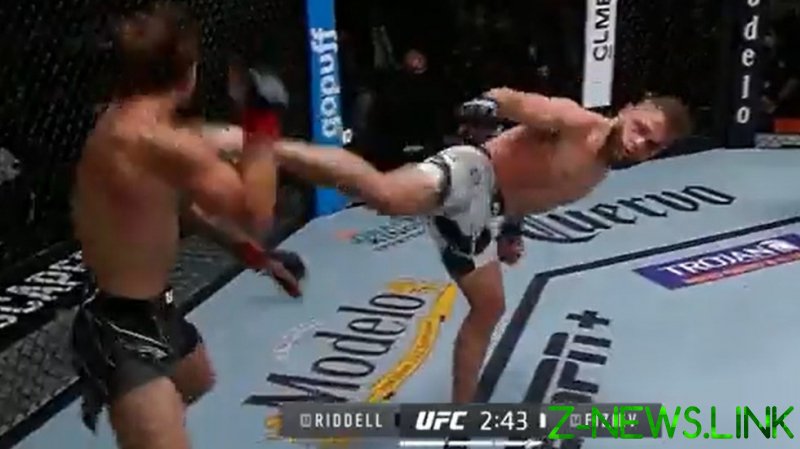 In a meeting between two men renowned for their clinical striking skills and who know each other well from their time training together in Thailand, the contest looked like going to the wire after a competitive first two rounds.

Fiziev caught Riddell with a big elbow in round two which opened up a nasty cut around the American’s left eye, prompting doctors to look at the cut between rounds before clearing him to continue.

That prompted some urgency from Riddell but Fiziev picked his moment perfectly midway into the third round as he uncorked a devastating wheel kick which froze Riddell on the spot.

The American stumbled to the canvas before trying to return to his feet in a daze, but referee Herb Dean had seen enough and waved off the fight at the 2:20 mark of the round.

The wheel kick finish was the 13th of its kind in UFC history and extended Fiziev’s unbeaten run to five –the fourth longest active streak among the 155lbs ranks.

The Kazakh-born Kyrgyz star now stands 5-1 in the UFC Octagon and 11-1 overall in an increasingly impressive career.

Riddell meanwhile suffered a first defeat in his fifth bout in the UFC Octagon and just a second loss in his 12-fight career.

Fiziev was full of praise for his beaten rival in his post-fight interview.

“I love him, I learned from him,” Fiziev told Daniel Cormier.

“I waited [for this strike] – I wait three rounds. I didn’t turn because I know when he goes this way his hands go down and he forget about spinning back kicks.”

After challenging social media sensation Hasbulla after his last victory against Bobby Green in August, Fiziev continued his traditional of unorthodox callouts.

This time he jokingly demanding a showdown with Hollywood star Vince Vaughn, who was watching on inside the UFC Apex.

Meanwhile online, fighters, fans and pundits were full of praise for Fiziev – with former lightweight title contender Michael Chandler tipping him as a future champion at 155lbs.

Fiziev’s fireworks earned him a Performance of the Night bonus and sets him up nicely for a potential assault on the upper echelons of the lightweight division in 2022.

READ MORE: ‘Nothing more connects me with Kyrgyzstan’: UFC fan favorite Fiziev turns back on homeland after ‘religious harassment’

In the main event of the night, UFC icon Jose Aldo delighted his legion of fans with an impressive win over bantamweight contender Rob Font.

Aldo snapped Font’s four-fight winning streak and continued his remarkable renaissance with a third win on the spin.