Home / policy / The GULAG and the war. As disseminated metastases of Stalinism

The GULAG and the war. As disseminated metastases of Stalinism 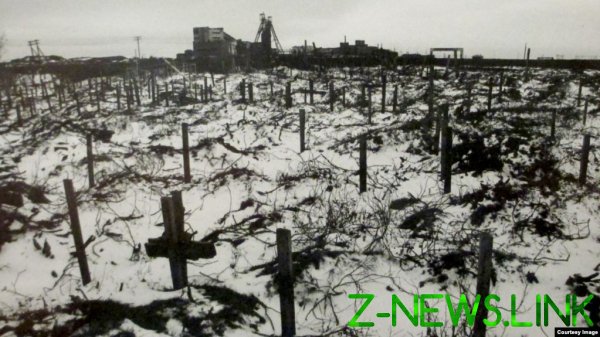 The grave of dead participants in the Vorkuta unrest 1953, the exhibition “GULAG” in GIM

September 1 marks the 80th anniversary of the beginning of the Second world war, which the USSR entered as an aggressor, by invading the territory of the then Eastern Poland, Western Ukraine and Western Belarus. What role was played by the Soviet camp in the preparation and conduct of battles in the years 1939-1945, says Professor London school of Economics and political science, Pulitzer prize winner Anne Applebaum, author of “GULAG: the Web of big terror” and other works.

– What is the role of the GULAG played in the preparation of Stalin the Second world war?

– Double – political and industrial, the GULAG was a very important tool of Stalin. In the 1930s, he used it to keep prisoners – known party members, and millions of peasants arrested during collectivization and dispossession, and of people whom he suspected of disloyalty, potential enemies.

Slave labor was an integral part of Soviet planning
So Stalin terrorized society. He also viewed the GULAG as an economic tool, he believed that forced labour can be strengthened Soviet Union. The GULAG was an important part of industrialization for the construction of factories, mines and canals, logging, development of uninhabited lands to the East and North-East of Russia. For example, coal mines near Vorkuta and the gold mines in Kolyma were initially developed with the help of slave labor, which was integral part of Soviet Central planning.

Stalin in the 1930-ies were preparing for the great conflict, he wrote and spoke about it quite openly.

During the bout, the GULAG played a role in the production of weapons. In the first 18 months of the Soviet-German war 35 colonies of the Gulag were converted into factories for the production of ammunition. At least twenty camps, they sewed uniforms for the red army, others made phone the field of communications, released 24 thousands of mortars and more than a million seven hundred thousand gas masks.

Stalin believed that will surpass the West militarily faster, if not pay people for work. He is always closely watching the performance of prison labor and what they do for the national economy.

The Nazis knew about the Gulag system, there are indications that the Germans in the early 1930-ies and visited the Soviet camp. It is therefore likely that Hitler was inspired by the idea of concentration camps from Stalin, similar rumors circulated in Germany in the 1940s.

Whether there was evidence in the spring and summer of 1939 the organizational and structural changes in the Gulag, who would have testified about the transition of hard labor on a war footing?

– Changes in the Gulag began in late 1938, when mass executions had stopped and the Great terror ended. Stalin replaced the head of the NKVD Yezhov and Beria began to pay more attention to the economic “success” of the camps. At the end of 1939, Beria began to change the conditions of detention behind barbed wire, was streamlined rules in order to make the camp more “profitable”. He also instructed the camp commandant to the prisoners left alive with a view to their best use.

In the years immediately preceding the war, a number of camps have been transformed into a serious industrial complexes
Another important development in 1938 for the replenishment of “sharashkas” by the scientists involved in developments for the military industry. Beria really sought out the best minds of those who were arrested, and brought them back to Moscow and Leningrad. Valentin Glushko, chief designer of rocket engines in the USSR, and Sergei Korolev – the future father of the Soviet space program, were in the sharashka during the Second world war. There worked and Tupolev, the famous aircraft designer.

As a result, in the years immediately preceding the war, a number of camps have been transformed into a serious industrial complexes. Norilsk – Norillag was 1200 prisoners in 1935. In 1940, there were already almost 20 thousand. A large camp where prisoners felled timber, also began to expand at the same time.

– What has changed in the life of the Gulag in the first two years of world war II from September 1939 to June 1941?

The main changes were related to the fact that in the Gulag were hundreds of thousands of Soviet citizens: poles, Ukrainians, natives of the Baltics, Belarusians, Moldovans. Many of the deportees were in banishment. They came from lands that were invaded by Soviet troops, and was initially disoriented, but in General they are different attitude to the authorities and the Soviet system, than people living under the Bolsheviks in the years 1920-1939 Their anti-Soviet sentiments were more open. Later they created an important resistance group in the camp bosses and the tyranny and power of criminals.

– After a campaign in Eastern Poland, Finland, the seizure of the Baltic States, Bessarabia and Northern Bukovina – how has the prison system in the occupied lands? Used there work prisoners until June 1941?

– Yes, Soviet troops and the NKVD took the local prison and began to remodel in the centers of interrogation and inquest of the Soviet model. One of them was the future Prime Minister of Israel Menachem begin, who was arrested in 1940 in Vilnius.

Camp slave labor also soon appeared in the occupied territories, particularly during the invasion of Poland, when large place, fenced with barbed wire, was created immediately after the arrival of the red army in 1939. It all started with the infiltration of the camps where people were assigned one arrested, others shot, the third had to be deported.

In the early 1990s to publish information about what is directly before the fight with Hitler, the authorities released from the Gulag of the prisoners – both military leaders and “ordinary” repressed and sent them to the army. How widespread was this phenomenon?

About 4 thousand people were killed in the Lviv NKVD prison, because there was no time to evacuate
– Unfortunately, I can’t give an accurate statistical answer to this question, but it is known that Beria began to seek out the imprisoned military officers. General Alexander Gorbatov, for example, wrote that he was saved from Kolyma in the winter of 1940 and transferred to Moscow and released in the spring of 1941. Then he became one of the commanders of the attack on Berlin, one of those who took capital of the Third Reich.

– Since June, 1941 in the life of the Gulag and prisons testifies to the fact that the Soviet Union was not prepared to fight on their land?

– As well as other Soviet institutions and departments of the Gulag camps in the occupied in 1939-1940 territories from the Baltic to the Black sea was not ready for the German invasion. June 22, 1941, began shooting in Lviv NKVD prison, because there was no time to evacuate. About 4 thousand people were killed. Similar atrocities were commit in Vilnius, drohobycz, Pinsk and other cities. During the retreat of the NKVD also set fire to buildings and shot prisoners.

In areas where there was more time for retreat, the prisoners were evacuated – about 750 thousand people have been displaced from 27 camps, 210 labor colonies. Many died on the way to the East.

Often the entry of prisoners into the army during the Soviet-German war is described as a burst of patriotism. But in the army and the people were not starving, that an epidemic was observed in the Gulag in 1941-1945. To what extent have prisoners, asks on the front, prevailed the simple desire to survive and the desire to fight with the invaders?

The NKVD reported 975 000 prisoners sent to the Red army in 1941-1944
– Most of the prisoners were in the army because they were promised Amnesty, at least from July 1941 to the different categories of prisoners that allows them to leave the GULAG and to serve in the army. Do not always understand the motives of people, but it is obvious that the army gave at least a partial liberation and exit from the camp, and were fed better there.

– How many prisoners were sent to the front during the war?

In East Germany, was created ten Soviet camps
As a rule, ex-convicts sent to penal companies and battalions – on the most dangerous and difficult sections of the front, to the front, they were used for frontal attacks – “to atone for the blood.”

– What was the difference in the growth of the Gulag in Europe – from Germany to Albania, and in Asia – in China and Korea in the second half of 1940-ies – early 1950-ies?

Camp, created in Hungary and Czechoslovakia, Romania and Bulgaria, are all exact copies of the Gulag camps. Mostly Polish prisoners were deported directly to the Soviet GULAG because Stalin did not trust the Polish Communist authorities. Most of the Eastern European camps disbanded after Stalin’s death.

In 1942-1943, there is a record of the deaths of prisoners from hunger
Camps established throughout Eastern Europe and Asia, has always been modeled on the Soviet model, according to the Soviets, the MVD and MGB, but many of them have acquired local characteristics. In China, for example, the camp began as an exact copy of the Gulag, but eventually became a system that was centered not so much on slave labor, how to “re-education”: to force people to accept the Communist system. In North Korea, where there are still camps in the Soviet style, entire families and generations kept together: parents, grandparents, and children. There is the idea of the generic crime.

– In your book you write that the greatest number of prisoners held in the camps before Stalin’s death in early 1953. Is it possible to say that the Soviet victory in the Second world war is the victory of the Gulag?

– Yes, although during the Soviet-German war, especially in 1942-1943, there is a record of the deaths of prisoners from hunger, the success of the Soviet Union partly depended on slave labor behind barbed wire. In the end, the war became a good tool for Gulag: it led to the expansion of the camp system, which continued until the death of Stalin.