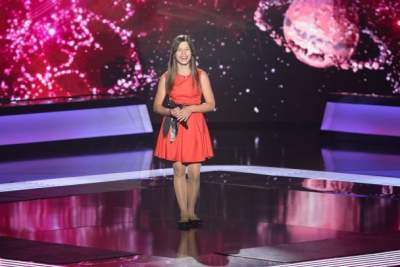 On Sunday, November 12, at 21:00 took place the second broadcast of the fourth season of the vocal project “Voice.Diti.”
For the second consecutive broadcast, participants “Voice. Diti-4” star impress coaches with their vocal abilities. So, last night the real struggle was over the 14-year-old Alexander Minenko from Kiev. Interestingly, Sasha is originally from Belarus, but recently, the family of the talented singer moved to the capital: the kid’s parents see in our country more opportunities for the singing career of his son. His performance of the Bruno Mars hit “Grenade” Sasha launched three coach seats, but chose the team of the group “Time and Glass”. It is reported by the Chronicle.Info with reference to TSN.

13-year-old Cassinia Boyko from the Black sea in the second edition of the “blind auditions” sang the coach of the project Natalia Mogilev “Free bird”. The girl turned the chair MONATIK, and Natalia in response to sensory performance, unable to restrain his emotions and openly told the story of the creation of the hit:

“I’m always very excited when you sing my songs. In the program “Chance” was a guy, Peter Dmitrichenko, who dedicated to me the incredible song “I boevomu without you.” It I liked it so much that I wanted to use the response to write something very bright Ukrainian language”, – said Natalia. In turn, Nadia Dorofeeva barely restrained emotion, sitting in a red chair, because, as it turned out, she participated in the same program:

“Natasha, don’t know if You remember, but that day Peter Dmitrichenko sang against me,” admitted Nadia.
14-year-old Elizabeth Yakovenko from Lutsk sang a song by the Scottish singer Annie Lennox “I put a spell on you”. Girl was amazed with star coaches from the first notes of the song, after all, has the lowest voice in the history of the project – the viola, and became a member of the team of Natalia Mogilev. In addition, her talent, Lisa was able to reconcile Nadia and Positive, which sat on different red chairs:

“We had never heard such a voice. It is found once in ten thousand years. It’s incredible,” said Nadia Dorofeeva.

13-year-old Vladislav Smetana wowed the judges with a performance of the song Tina Karol “Two grhi”. The girl’s voice is so similar to the vocals of the star performer, Natalia Mogilevskaya thought that Tina came to the project to play the judges. Vladislav turned to MONATIK and “Time and Glass”. The girl went to the team of Dmitry Montika.
Sunday evening heart star coaches has captivated a small fan of legendary jazz singer Ella Fitzgerald 10-year-old Maria Ermakova from Minsk, who dreams of becoming a real “mother of jazz”. On stage “Voice. Diti-4” Masha sang the iconic song “Summertime” and made the team of Natalia Mogilev.