Home / WORLD / The GameStop gamble is a disaster. You don’t fix a broken system by playing by its rules

The GameStop gamble is a disaster. You don’t fix a broken system by playing by its rules 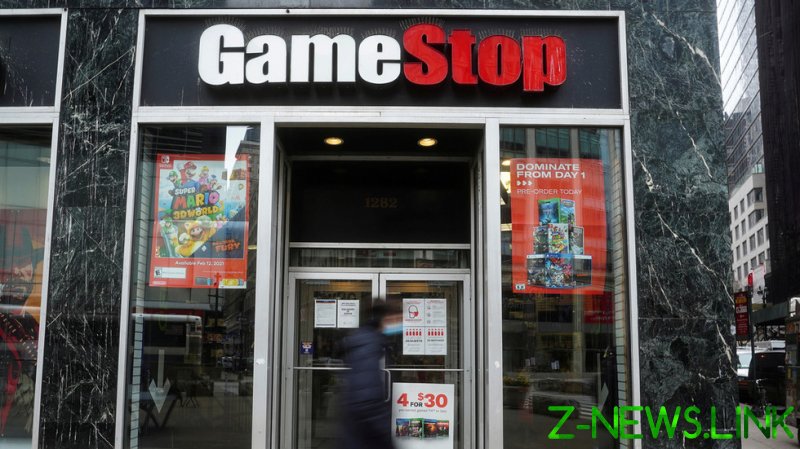 How does one spot a market mania? Joe Biden’s Treasury Secretary Janet Yellen spent almost two decades working at the US Federal Reserve. Her failed policies created the most significant wealth-inequality gap ever, while simultaneously inflating the most grotesque asset bubbles in the stock, bond, property and credit markets in history. Expectedly, Yellen has maintained “culpable deniability” for the entire mess (i.e., destroying markets’ primary pricing mechanism). Yellen, Alan Greenspan and Ben Bernanke created the problem and now want to “fix” everything.

Federal Reserve policies have broken the markets’ ability to properly function. Increased volatility and random, violent price movements in the stocks of garbage or insolvent companies telegraph two critical messages: a blow-off top is before us and a collapse in prices is coming.

It appears that small gamblers have banded together on social media to purchase shares and options in the most shorted stocks on the exchanges. Their false hope is to create “short squeezes” that force the options and stock sellers to buy shares to offset their positions, which creates massive price swings known as “volatility” and will generate HUGE PROFITS for these gamblers, pushing valuations of worthless stocks into the stratosphere! A tweet by St. Elon Musk encouraged the attack on short sellers and added almost $7 billion to GameStop’s market cap. This issue is not as simple as it seems, and what they are doing may be unlawful. Tesla’s valuation is grossly overvalued and has been inflated by internet hype. The man of the people, St. Elon Musk, made over $100 Billion from Tesla in the past year.

Redditors apparently have been taking investment advice from the subreddit known as r/WallStreetBets, which seems to have acted as a conduit to coordinate unlawful stock market price manipulation. It is extraordinary how toothless stock market regulators are by allowing fraudsters to anonymously use Reddit to collectively act to push the valuation of GameStop Corporation ticker GME to nearly $25 billion. That is almost a 2,000 percent increase in a month.

Robinhood’s army of day traders (more here) support their brilliance by utilizing Reddit to convince legions of investing neophytes to stage a “brilliant attack” on market short sellers by buying shares that will create a vacuum, making money for some but leading most of these inexperienced traders to the slaughterhouse.

NONE of these shares are appropriate investments for novice investors.

Despite how financially illiterate politicians have chimed in about free markets, existing SEC rules and regulations allow sophisticated investors (hedge funds) to enter into high-risk transactions such as “short selling.” If hedge funds lose money, too bad, no problem, they should know better. However, GameStock’s shares skyrocketed nearly 19,000 percent, from $2.57 per share to $482.00 in a short period of time. This price increase was a result of coordinated price manipulation. These day-trading firms should never allow novice investors to buy and sell options which greatly amplify risk. If these firms allow that, they could violate numerous rules and regulations. The problem is that the SEC never protects the little investor.

Here’s the deal: the small investor buys this stock on Robinhood at $482 per share and in short order the stock price drops to $112. That small investor would have lost $370 per share in minutes. These are inappropriate levels of risk for what the SEC rules and regulations deem “unsophisticated investors.” Additionally, these smaller investors, when they lose a bundle and sue the broker for allowing them to enter into an “inappropriate investment,” may win back their losses. Price action like GameStop’s is not investing, it is gambling. You do not want to be the person buying at $482 and selling at $100, or worse.

The Securities and Exchange Commission’s (SEC) role is to protect investors against fraudulent and manipulative activities. The SEC is responsible for regulating the US securities industry, stock exchanges and options markets, which are all subject to federal securities laws. Unfortunately, the feckless regulators at the SEC do not protect consumers, aka neophyte “investors.”

The SEC is another “do nothing” government agency. Billionaire Elon Musk’s 2018 tweet “Am considering taking Tesla private at $420. Funding secured” was fraud that manipulated Tesla’s share price, and the SEC did nothing. San Francisco US District Judge Edward M. Chen ruled that Musk’s statements were false and misleading. Musk paid a $20-million settlement and remains at the centre of a class-action lawsuit. Musk has ignored SEC rulings and taunted the SEC with comments such as “I want to be clear. I do not respect the SEC. I do not respect them.”

It beggars belief how no regulatory agency has conducted a forensic audit into Musk and Tesla’s claims and representations, including Tesla’s “profits” and accounting practices, its balance sheet, potential conflicts of interest with board members and the Solar City merger.

Do not expect Washington to help small investors. Washington created the problem and broke the system. Case in point–Congress is exempt from insider-trading regulations. Just look no further than Nancy Pelosi, who has invested in Tesla options that have already produced her a hefty profit based upon her knowledge of Joe Biden’s incoming “Green Agenda.” Is it wrong for the speaker of the House of Representatives to profit from “insider information”? Nah. Nancy Pelosi did the same thing with the VISA IPO.

My advice? If something seems too good to be true, it is, and trying to outsmart Wall Street by inflating the value of worthless companies can only end in tears, unless you can influence legislation or are Nancy Pelosi.