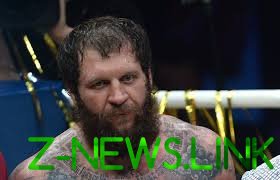 40-year-old Orlovsky admitted that he believes Emelianenko “fake”. He also added that the team of the Russian fighter “was a bit tacky.” Probably, Orlovsky has in mind the circumstances that surrounded their fight under the auspices of the Affliction promotion. The fight between heavyweights took place in 2009 and ended with the victory, Emelianenko by knockout.

Orlovsky is not the first time critically commenting on the Russian fighter. So, in January 2019, he commented on the defeat of Emelianenko from American Ryan Bader, noting that the Russians “glass jaw”. Thus, he said, and the opinion of some fans that the defeat of the Belarusians allegedly related to his inability to take punches.

Emelianenko known for his performances in Bellator and Pride. His last fight he held in Japan on 29 December 2019 and won over American Quinton Jackson. It is planned that the Russian heavyweight will play another two games and will finish his career.

Orlovsky is a former UFC champion. Belarusian continued to be the promotion. On account of his 28 wins and 19 defeats in mixed martial arts.