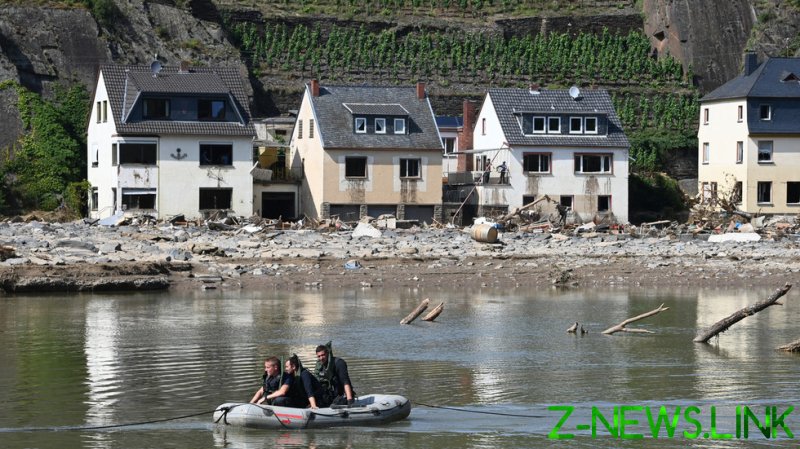 The political dishonesty about the recent tragic events in Germany is biblical. Instead of admitting that the tragedy was rooted in the inability of the German authorities to act on a series of remarkably accurate forecasts about impending extreme floods, the disaster has fed the climate-change narrative.

This was the message Chancellor Angela Merkel expressed during a visit to the largely destroyed Eifel village of Schuld. “We have to get faster in the fight against climate change,” she said, and added “We also need to pay more attention to adaptation,” warning that adaptation to the effects of climate change, such as drought and extreme rain, is not only an issue for Africa but also Germany.

However, what was genuinely revealing was that Merkel was interrupted by the mayor of Schuld, Helmut Lussi. While the media concentrated on how he was overwhelmed by his emotions, what he said was ignored because it implicitly challenged the climate-change narrative.

Lussi simply referred to the chronology of three previous devastating floods in Schuld: the first had taken place in 1790, the second in 1910 – eras where there was no climate-change discussion. The third, 2021, was by far the worst. “You cannot calculate such catastrophes,” he added.

But the sad tragedy is that this latest catastrophe was calculated.

The first signs of a catastrophe were detected nine days before the event by a satellite in orbit 500 miles above the Rhine river. A team of scientists sent the German authorities a series of remarkably accurate forecasts about the impending extreme flooding along the Erft and Ahr rivers and of towns such as Hagen and Altena. Despite at least 24 hours’ warning that precisely predicted which would be the worst-affected districts, hundreds of people were caught unawares when the deluge came. Close to 200 people needlessly perished as a result, with many still missing.

Hannah Cloke, professor of hydrology at Reading University, who helped set up and designed the European Flood Awareness System (EFAS) in the early 2000s to deal with disasters such as this, expressed alarm that a “monumental failure of the system” had led to one of post-war Germany’s deadliest natural disasters.

The cataclysmic floods across central and eastern Europe in 2002, which claimed at least 110 lives in nine countries, spurred Cloke on to ensure that such tragedies should be avoided and that potential victims had to be forearmed. “Given the number of deaths and the amount of damage, we had the idea that we should never allow this to happen again,” Cloke explained.

The system they set up, which includes algorithms that combine observations from the European Union’s Copernicus satellites with hydrographical records and readings of river levels, is designed to give national agencies up to ten days to prepare for the worst. The science worked – they accurately predicted the catastrophe – but the risk management failed.

So, why did a system designed to prevent such tragedies fail so dramatically?

The failure lies in the profoundly misanthropic cultural moment, which sees humanity as the earth’s biggest threat, rather than what the science indeed revealed, namely that humanity and human reason are the solution… provided society is willing to act upon its knowledge.

In 2014 alerts and maps from Efas allowed the authorities in Serbia, Bosnia and Croatia to fine-tune their response to colossal flooding in the Balkans.

Had German authorities acted upon the science, there is no doubt that the disaster there would have been mitigated.

The Federal Office for Citizen Protection and Disaster Assistance (BBK) had issued alerts to the relatively small fraction of the public who had downloaded its apps. Most people were caught unawares.

The BBK is a national joke in Germany. Last September, it organised a nationwide “warning day,” which was a national embarrassment. People across the country were supposed to be simultaneously deafened by sirens and inundated with alert messages in a simulated natural disaster. It became a debacle: most of the technology didn’t work.

There is something systemic about this failure. It reveals that there is now a fatal gap between the willingness to foster fear about climate change, particularly among children, and the ability to develop the robustness and human agency to manage risks and disasters.

In Germany, the silence of the Greens on these events has been deafening. With elections approaching, one would have thought this was perfect for them, given their high standings in the polls. But as Times columnist Roger Boyes points out, it has been left to Merkel rather than them to address the current weather disruption.

It appears that, as the Greens come closer to government, the more nervous they are about governing the crisis they have been proselytising for decades. It is easier to cry wolf than deal with a real wolf when it enters your home.

What the floods in Germany have revealed is the irresponsibility of the climate-change catastrophists.

This is where Greta Thunberg, and the ‘How Dare You!’ brand of politics ends up: an infantile temper tantrum that demands ‘something must be done, and now!’ but then refuses to take responsibility for the consequences.

Just as the Greens are unwilling to explain why and how their policies will result in real cuts in living standards for ordinary Germans – and the rest of us – for fear of losing electoral support, it is the ordinary people who will suffer the most.

This is what we have seen so tragically demonstrated in the authorities’ inability to act upon their climate-change fear-mongering.