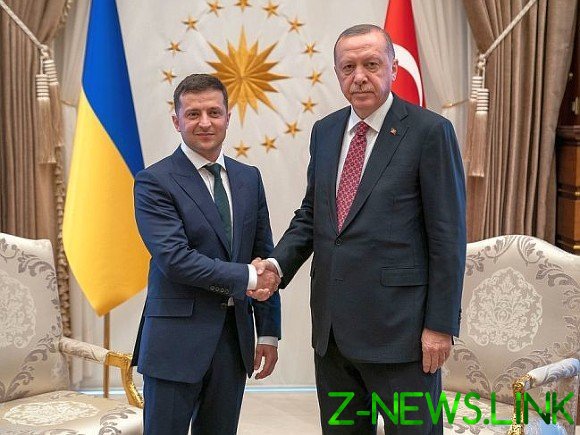 State visit to Turkey was for the Ukrainian President’s debut. At home believe that, in Ankara and Istanbul, the national leader, at least, certainly not disgraced himself.

“Ah, nicely said about how rich we will soon begin to live! sigh millions of Ukrainian viewers at the TV screens. But why are the first to know about the Turks, not us?”

In the speeches of Vladimir Zelensky in Ankara and Istanbul, where he last week made his first official visit in the status of the head of state, sounded the answers to many important questions that the public can not obtain any clear explanation within the country. Economic plans of the new team President is very confident reveals abroad, stunning not only foreigners, but compatriots, and dizzying perspectives. The house still preferred to keep quiet about them, trusting to make statements to his neighbors.

Particularly pleased with the ear of the average Ukrainian Zelensky promise to invest in infrastructure of at least $ 20 billion to put in order more than 24 thousand kilometers of roads, to ensure the development of the five sea ports and increase the number of operating airports to fifteen. These promises sounded a bit fantastic, but on the other hand, suddenly ex-showman and really knows more than others?

In General, Turkey trip the President made a lot of noise, although not unambiguous evaluations as in the expert community, and among ordinary citizens. Some believe it is definitely a breakthrough and successful — say, the Turks are now willing to invest in the Ukrainian economy much more than before. Other pessimistic grin and claim that Erdogan is more profitable to “make friends” with Putin than with Zelensky. Today Mr Effendi praised Kiev, a week curtsy Moscow. The visit can be divided into three parts.

Relations with Turkey, one of the major players in the black sea and the Mediterranean region, is extremely important for Ukraine — to get along with her need. First, the Crimean Tatars — the second ethnic minority in this country in size (after the Kurds). This fact is forcing Erdogan to have “pleasant” for Ukraine’s position on the issue of “occupation” of the Peninsula. Zelensky understands this, not missing the opportunity to exploit this subject. In his speech he strongly emphasized the infringement of the rights of the Crimean Tatars, is long and sentimental, recalled the tragic story of the offended people, caused some “jealousy” of the Ukrainians, first and foremost concerned with his personal issues. At some point even thought that Vladimir and did offer to give the Crimea to the indigenous population with the formation of its own statehood. But no, at the end of his speech, looking back at Erdogan, stressed that the Peninsula needs to go back under the jurisdiction of Ukraine.

However, some experts have suggested that the voicing in Kiev one, Zelensky “on the sidelines” discussing with the head of Turkey the possibility of mediation Erdogan’s reconciliation with Russia. The Turkish side is keeping quiet about it.

Second, if Kiev did not agree with Gazprom on gas supplies and the further fate of the Ukrainian pipeline, that Turkey controls the Bosphorus, can ensure the passage of tankers with liquefied gas from Qatar — now this option is already considered, if not seriously, certainly not as a joke. Not known for certain, whether raised Zelensky this question in a closed two-hour meeting with President Erdogan, but the logic should be.

Thirdly, Turkey is potentially interesting in principle. The multi-vector policy of its unique. Having ambiguous relations with the EU (although the EU is perhaps clear — bad) and NATO, Ankara boldly allows himself to maneuver between political preferences, skillfully drawing on his side of principle between adversaries. It will enter into an Alliance with trump on certain issues, then collaborates with Putin. The non-recognition of Russian Crimea, not a hindrance to promote the “Turkish stream”, and a good (well, almost) relations with the United States — buy anti-aircraft missiles s-400 from Russia. Who knows, perhaps, and Ukraine, something perepadet, if the Turks see the practical interest in cooperation with Kiev. And suddenly the Turkish pilots again inadvertently some Russian plane shot down, and Ankara will need new allies?

Zelensky tried to convince Turkish business is that Ukraine is a great springboard for a good investment and additional earnings. “I personally will guarantee your comfortable work in Ukraine”, — the President said at the business forum in Istanbul. He promised before the end of the year to carry out land reform, throwing on the market of 40 million hectares of quality topsoil, and large-scale privatization, which investors supposedly get access to hundreds of interesting objects.

The President also announced the transition to 5G (foreigners should be interesting) and willingness to attract Turkish construction firms as contractors to restore the Ukrainian roads (this is a particularly “fat” piece for “understanding”, if we consider that already operating on the Ukrainian market for Turkish contractors quickly learn in some offices to bring kickbacks).

Separately sounded the invitation to restore the Donbass, however, without specifying when it will be possible to proceed in practice would be the trip Zelensky in Turkey was under threat because of the failure of the “bread of truce.”

During the visit an agreement was signed on cooperation in the framework of the bilateral Business Council between the foreign economic relations Committee of Turkey and chamber of Commerce and industry of Ukraine. However, critics say Zelensky, which is much healthier for the economy would be an agreement on free trade area, 99% agreed by the previous composition of the Parliament and frozen because of Ankara’s purchases of weapons from Russia.

Announced was the intention in the near future to increase the bilateral trade from the current 4 to 10 billion dollars per year. Erdogan confirmed the assertion about Zelensky at the briefing gloomy nod of the head. In General, almost new-Vasyuki some. But the Ukrainians, though doubtfully shake their heads, but also added: “God Forbid!”

And here and say nothing special. Rather, there is, of course, but very briefly, because the meeting with “spirit guides” new Orthodox churches of Ukraine, created by the efforts of Petro Poroshenko, ended quite unexpectedly. Zelensky and Ecumenical Patriarch Bartholomew has not signed the joint statement, as planned in advance. Document Fanar Ukrainian Ministry of foreign Affairs prepared, but at the last moment the parties had ceased to understand each other.

On the official website of the President said only that the meeting in Istanbul, he thanked Bartholomew for the support of Ukraine and said that the government should not interfere in Church Affairs, but will protect the independence of the Church.

“Theorists”, of course, erupted with a storm of words about what it really means. However, definite conclusions from these razmyshlizmy no. It is possible that Zelensky and really decided to distance itself from the Affairs of the Church and provided DNC an opportunity to resolve a conflict situation with competitors and the flock. According to another version, the President has no ready-made solutions and just laid these issues on time in order to keep the space for political maneuver and not spoil the main at this point, the purpose of the visit — negotiations with Erdogan. Met and okay.

How familiar still perceive the results of the visit Zelensky: success or failure? In Ukraine, it seems that most are willing to put their President in foreign policy debut, at least a solid b (if on a five-point system, of course). After all, despite some rough edges, categorical denial of requests and wishes from the Turkish side was not followed. The debutant did not look pathetic and ridiculous. Well, not spoke fluently in English, like Poroshenko, but the place screwed it in a couple of sentences in Turkish that owners obviously liked. And two hours spent one-on-one with such a “hardened gold”, as Erdogan. And that means something.