Home / Society / The fire in the Church of the Transfiguration Balashikha. Version

The fire in the Church of the Transfiguration Balashikha. Version 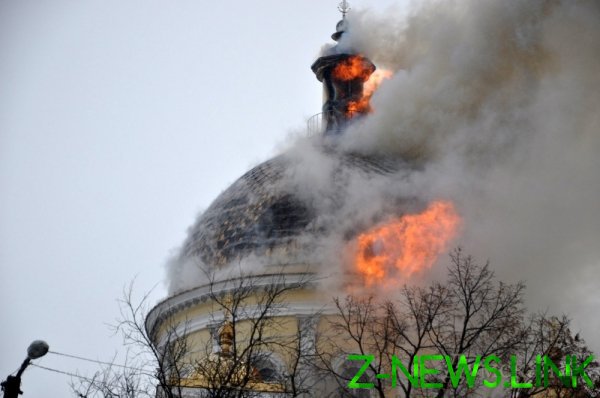 30 November in the Church of the Transfiguration in Balashikha fire occurred. Whenever burning an Orthodox Church it is an emergency, but this time a fire occurred in the temple built in 1786 by architect Bazhenov in the estate of Prince Golitsyn Pekhra – Yakovlevskaya. The unusual shape of the temple, associated with the legacy of the great Russian architect Bazhenov who built such magnificent ensembles as the Pashkov house, the Palace complex in Tsaritsyno and the Moscow Kremlin (the project) and the temple of the Mother of God “Joy of All who sorrow” in Bolshaya Ordynka.

Temple on the Big Ordynka and the Transfiguration are largely identical and belong to the Creator of the Russian classicism of the architect Bazhenov. But a small copy of the temple on the Big Ordynka in Balashikha can be lost because of too big impact from fire. Burned the porch, and the entire second floor over it, so much so that the plaster on the landing, where, apparently, was the great heat, in many places crumbled.

Given that the concrete floor took the full force of the fire, the restoration of the former appearance of the creation Bazhenov will be very difficult. How could it happen that the object of cultural heritage of Russia and the Russian Orthodox Church could have caused a fire, but still such power? Where he was responsible for fire-fighting equipment, the people, where he was the rector of the Church of the Transfiguration, Bishop Nicholas (Pogrebnyak), is responsible for everything that happens in the Orthodox Church metochion of Patriarch Kirill?

See also:  At the international exhibition in Kiev showed a giant loaf

In the temple should be provided with fire safety, according to PPB 01-93, and NPB 108-96 with the installation of automatic fire alarm, but the TSA somehow failed or were not there. Why? Violated Federal law №69-FZ (article 37) and from 21.12.1994 №73-FZ of 25.06.2002, which specifies measures for the protection of cultural heritage from fire, particularly fire separation of areas. Nothing has been done! They built a concert hall that regularly hosts concerts and acts singer Oleg Pogudin. In the satisfaction of hearing a performer of songs money the Bishop Nicholas (Pogrebnyak) was found, and the fire protection no! Of course, the Church needs a concert hall, well-equipped refectory, the Abbot of expensive cars, but who should care about the preservation of cultural and historical monuments, passed in the early 90s in the ROC? Given the fact that the monument of the XVIII century and now is under the direct supervision of the Patriarch Cyril, therefore, he should care about preserving the heritage of Bazhenov. In this case, no claim Bishop Nicholas (Pogrebnyak) to nominate not – to blame the Patriarch. He did not control the serviceability of household appliances, is he not mounted the APS in the temple and did not provide fire extinguishers, he is not separated with fire barrier areas of the temple, therefore, for the destruction of heritage Bazhenov meets the Patriarch – and with it the demand.

See also:  "Quarter 95" amused his version of the hit Potap and Nastya Kamenskih

It is sad that in this century the burning of Orthodox churches, but the question arises: why are these buildings used for various assignments during the godless regime of the USSR, did not burn as it is today? When religious buildings – monuments of architectural heritage were closed or they were located Museum workers (at best), no fire was not, but today is not one year, to somewhere in Russia caught fire temple. This is the Satanist – mongers making their work or the bishops pay no attention entrusted to them the ownership of the ROC? Rather, second, as the current carelessness of the bishops of the Orthodox Church and hedonism have nothing to do with preserving the heritage of the Church.

Surely the Patriarch is not able to strictly ask those, who actually becomes the destroyer of Orthodox shrines? Is the power of Bishop Nicholas (Pogrebnyak) above primatial service of the Patriarch? If not, then who was to attend to the preservation of the cultural heritage of the Russian Orthodox Church and Russia, not as someone entrusted with the care of the monument? Is Nicholas (Pogrebnyak) thinks that the fire and the restoration of the Church of the Transfiguration in Balashikha will meet Patriarch Kirill, and not the one who made the real desecration of Orthodox shrines?