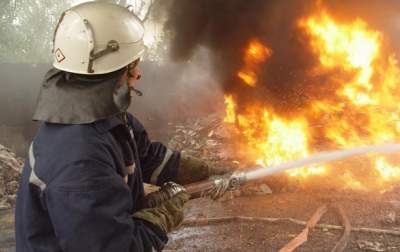 The cause of the fire becomes clear.

As a result of incident hospitalized three small children.

In Kharkov in a private residential house on Thursday, November 30, a fire occurred, causing was hospitalized three small children.

It is noted that at 12:30 on ignition on room 101 said a bystander noticed the smoke.

“Near the house he met 2 boys (2014 and 2015 G. R.), who told him that inside the house were their sister. Parents at that time was not at home. The man immediately rushed to the rescue. Entering the smoke-filled house, he found in one of the rooms the girl (2016 R). The baby suffered multiple burns and was hospitalized on the carriage ambulance to the burn center of Kharkov. Boys who inhaled a poisonous smoke, was also hospitalized in hospital”, – stated in the message.

To the place of fire was sent 4 fire and rescue units DSNs. At the time of their arrival in one of the halves of the house fire were covered by the household things on the area of about 10 sq. m. Rescuers have localized the fire at 13:15 and 13:45 – liquidated.

As a result of incident two boys inhalation of products of combustion, and their one-year-old sister suffered multiple burns and was in critical condition.

The cause of the fire has not been determined and is being determined.