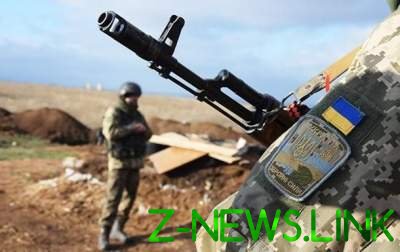 According to the Ukrainian intelligence, retaliatory fire two separatist was wounded.

Units of the separatists over the past day, nine times fired at positions of Ukrainian armed forces in Donbass. Twice used weapons prohibited by the accords. The Ukrainian military did not suffer losses, said in a morning summary of the press center of the headquarters of operation joint task force Friday, April 26.

Thus, in the area of responsibility of tactical group East opponent eight times fired at positions of forces of OOS:

three times from grenade launchers of various systems, heavy machine guns and small arms in the area of settlements of Gnutovo and Food;

three times from heavy machine guns and small arms near the settlements Lebedinskoye and Talakivka.

In addition, bombardment of positions in the Crimean from 82-mm mortars and grenade launchers.

“Since the beginning of the current day attacks on the positions of the United forces of the enemy, not recorded,” – said in the headquarters.

According to the Ukrainian intelligence, retaliatory fire two separatist was wounded.