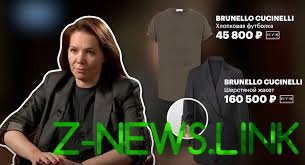 The Fund of struggle against corruption Alexei Navalny has studied photos of the Deputy mayor for social development Anastasia Rakova and came to the conclusion that her closet is worth at least 15 million rubles.

In the April pictures, where the mayor Sergei Sobyanin together with Cancer visited the construction site of a hospital in Moscow, she is wearing allegedly stole Chanel over 77,5 thousand roubles and a coat Loro Piana for 448 thousand rubles. During one interview, the Deputy mayor wearing pants, jacket and shoes with a total value of 435 thousand rubles. The photos and videos of Anastasia Rakova found expensive jewelry: for example, at one of the meetings of the government of Moscow it has appeared in the Graff diamond suspension cost 8 362 500 rubles.

According to official declarations, the average income of the Vice-mayor for the past five years is seven million rubles a year. Rakov is not married, other sources of income besides the civil service, she is not, noted in the Fund.

“It’s just what she decided to take a picture. What else she is, given the tastes and scope, it is terrible to imagine. Obviously, Rakov live on the salary of the Vice-mayor. But it never even comes to mind is to hide. She proudly wears the evidence of his corruption for yourself, do not hesitate to receive them in public, and to act on the Federal channels. She does not care, find out whether the somebody price her things because she is afraid of nothing,” said the FCO. Rakov itself until the approval of the Fund did not comment.