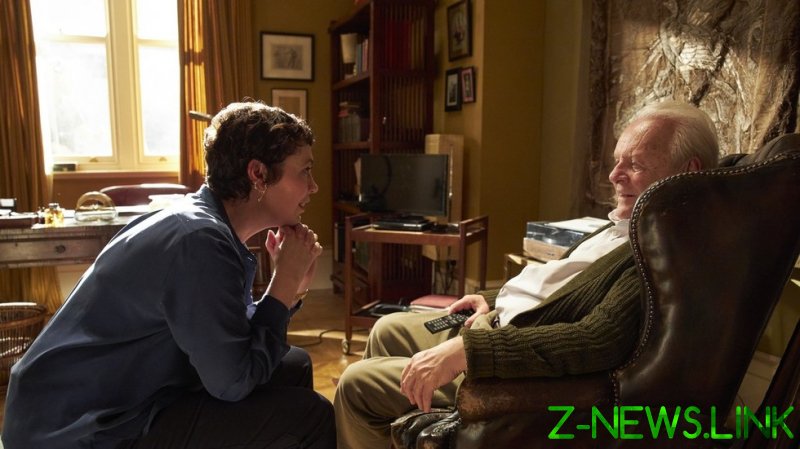 The Father is a terrific movie that tells the story of an aging man struggling with dementia, and it has left me rattled as it’s uncomfortably reminiscent of the delusional and disorienting nature of American life.

The film is rightfully nominated for Best Picture at the upcoming Academy Awards as it showcases a superb performance by Anthony Hopkins, who was nominated for the Best Actor Oscar for his stellar work.

What makes The Father such a poignant and insightful film is that director Florian Zeller doesn’t just show the effects of dementia on the screen, he immerses the audience in the excruciating experience of it.

Watching the film and experiencing that disease-imposed confusion, I couldn’t help but think about how, here in the US at least, it feels as if our entire culture is suffering from a collective dementia. The disorientation and detachment from reality that come with that dreaded disease are entirely commonplace in America, where we seem incapable of remembering the past, or of clearly seeing the present.

This rapacious American dementia is fueled first and foremost by the mainstream media’s manipulation and misinformation.

The establishment media have long distorted reality in order to manufacture consent around a desired narrative. This is why Americans always see themselves as the ‘good guys’ on the world stage and not as the imperialist aggressors and colonialist exploiters that we are.

For proof, just look at the flag-waving coverage surrounding the Iraq war and the weapons of mass destruction nonsense, or the egregious media assaults on Julian Assange and Edward Snowden compared to the genuflecting coverage of infamous bs artists like Navy SEAL sniper Chris Kyle, George W. Bush and Barack Obama.

This duplicitous media approach can often be so blatant as to be ridiculously absurd, such as when CNN described the rioting, looting and arson that blighted America last summer as “mostly peaceful” protests.

The same is true regarding the current wave of anti-Asian violence. The media blame the attacks on the ever-expanding yet conveniently amorphous label of ‘white supremacy,’ but the videos and statistics regarding these repugnant attacks against Asians show black people make up the majority of perpetrators, a fact the media steadfastly fail to mention.

Another dementia-like distortion caused by the media is the perception that police are killing black people en masse.

As a 2021 Skeptic Research poll found that most Americans greatly over-estimate the number of unarmed black people killed by police.

When asked “How many unarmed Black men were killed by police in 2019?,” 53.3 % of those self-described as “very liberal” estimated that over 1,000 unarmed black men had been killed by police, even though the actual number is believed to be between 60 and 100.

According to the same study, 24.9% of people killed by police are black, yet those self-describing as “liberal” or “very liberal” estimated the number to be 56% and 60% respectively.

This detachment from reality is no shock as, according to a Gallup poll, over half the country already over-estimates the size of the black population in general, believing it to be more than 30%, when in reality it is roughly 14%.

The over-estimation of police killings of unarmed black men is to be expected, as the killing of a black person by the police or by a white person generally results in massive media coverage and a declaration that the only motivation for the incident is racism. In contrast, the deaths of white people at the hands of police or by black perpetrators are not considered noteworthy.

The anti-Russia hysteria is another establishment media-manufactured narrative that is directly at odds with reality, but which is deeply rooted in the American psyche.

Russiagate, hacking of electrical grids, using super-secret microwave weapons to attack US diplomats and putting bounties on American soldiers in Afghanistan are just a few of the dominant pieces of anti-Russian disinformation devoid of fact that the media tout as gospel truth.

The immigration crisis is another bewildering story disorienting Americans. The media vehemently chanted the mantra “kids in cages” when Donald Trump detained children at the border, but were silent when Barack Obama did the exact same thing during his presidency. And now that Joe Biden is doing it too, the media are back to downplaying its significance or ignoring it entirely.

And of course, the most perplexing media coverage surrounds coronavirus. Originally the press excoriated anyone who raised the notion that the disease may have come from a lab in China, but now the truth that they aren’t sure where it initially came from is finally being acknowledged.

The medical establishment is just as perfidious and deceitful as the media.

For example, Chief Medical Advisor to the US president Dr Anthony Fauci knowingly lied early in the pandemic about the need for masks.

And last summer a collection of medical professionals said that no large groups should gather, except at Black Lives Matter protests, making the obscene and absurd claim that the media manufactured epidemic of racism was just as bad as the coronavirus pandemic.

In addition, fears over vaccinations are broken down by race, with white concerns stigmatized and black worries gently understood.

Just like dementia, this insidious media and medical duplicity creates stress, irritability and aggression among the populace.

In conclusion, The Fatheris a masterful film insightfully exploring the tragedy of dementia, and the hypocritical, pernicious, frivolous and mendacious establishment media are a relentless dementia-simulation machine. The former is worth indulging, the latter is terminal and should be avoided at all costs.