Home / auto / The fastest Audi wagon “caught” on the tests

The fastest Audi wagon “caught” on the tests 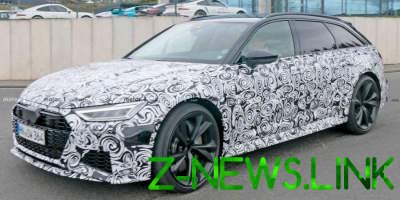 A new generation of station wagon Audi RS6 Avant undergoing road testing in light camouflage. The machine combines the practicality of a wagon with the power and dynamics of a sports car.

Interestingly, imprinted on these pictures the prototype of the Audi RS6 Avant is considerably more camouflage than the previous spy photos, dated June 2018. But the disguise is unable to hide the new air intakes in the front bumper and a massive splitter, and black details on the front and rear wings, probably to hide sensors electronic assistants driver. The car has received a large black discs with 5 V-shaped spokes. In the rear part visible is a massive spoiler and a pair of huge exhaust pipes oval.

See also:  Groisman caught on the reservation, "according to Freud"

It is known that the wagon will remain in full drive and will be equipped with enhanced brakes, which can be seen even on the spy photos of test prototypes.

According to reports, the public debut of the serial Audi RS6 Avant the new generation will take place at the Frankfurt motor show in September 2019. Sales in Europe should start before the end of the year.