Home / economy / The farther, the more the country is immersed in poverty and hopelessness

The farther, the more the country is immersed in poverty and hopelessness 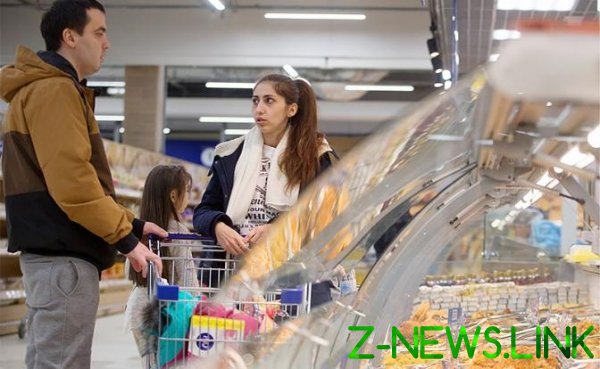 To be able to buy the most necessary, the income of the average Russian family must be 58,5 thousand rubles. This is with reference to a study by the Federal state statistics service reported to RBC. A study on financial position and living conditions of the population. Held it in September of last year in all regions of Russia on the basis of personal interview.

It turned out that the least demanding, we are family pensioners — they made a minimum income of $ 38.3 thousand rubles. At large queries more — which is understandable — 82 thousand rubles per month. And for the young families and incomplete families (single-parent) requires a minimum of 68-69 thousand and 62.5 thousand respectively.

It is noted that 79.5% of Russian families can’t always afford to buy the necessary minimum of goods (in a poll like this at least understood subjectively, for each household in his own way) without going over the budget. More than half (53%) in case of urgency I can’t find the money to repair housing or medical services.

Almost half (49.1 per cent) are not able to pay for a week’s holiday away from home once a year. More than a third unavailable seasonal shoes. And 21.1% restrict the usage of fruit.

The data, in fact, disappointing. But how much income, in General, can be considered normal?

— You know perfectly well that the question in this case is not about the income that is actually relevant to the people, and the income which they would like to have, — commented General Director of the Institute of regional problems Dmitry Zhuravlev. — And it’s not that he’s overpriced, but the fact that he is pretty biased because people does not compare with the volume of the consumer basket. No one was sitting and not counted for themselves on paper: “I need a month-and-it — costs so much, plus this and this — is-so.” Someone must have calculated. In Europe, for example, is the traditional approach, and we have since been made. Our man measures by eye.

In other words, we proceed not from the income of a person per se, but we believe his ideas about wealth.

This view is most often determined by just double, triple salary. Any income is great only when it appears. If you paid twenty, became fifty, you think that you have a lot of money. Two months later, it turns out that fifty is not enough.

That is, the approach of this survey is very important. But it is important to determine the social climate (from the point of view of people’s perception of his life), not standard of living.

But here the objective is here is the most — are unable to buy something. The person simply enters the store, he knows he can’t afford so-and-so… Or, say, treatment can not afford, or vacation.

It is an objective thing.

Know how refers to the average level of the middle class? I have one wise man said that the middle class is the person who comes to the store and buys what he needs and not what he has enough money.

So qualitatively this can be determined. Quantity and harder. Because, you know, and prices and incomes in different regions are different.

See also:  Kyiv will raise a loan of €110 million for the purchase of streetcars and subway cars

Why seniors are such unassuming? Because they come from the size of their pensions. They do not multiply twenty thousand wages, and eight thousand of pension for three, and they do a sum, which, they think, if three times as much to get enough.

But disturbing is what people are forced to limit yourself not choice to buy a pineapple or apples, but the fact that someone can’t buy fruit.

This is already an alarming sign. This means that the consumption structure is insufficient, it is not the one that was supposed to be.

Yeah, but you’ve got to understand — we have a market economy. If you just mechanically increase the incomes of the population, the owners of the stores after some time will understand and immediately increase prices.

Therefore the increase in revenues in its pure form (in the sense of money) in the short term decides to do something, but long term won’t work.

To raise the they will still. But this process was not really completely subjective. I just want to make my products cost twice as much — and tomorrow outweighed the price tag, as we do often.

“SP”: — why our prices for goods and services grow, and to work, which is incorporated in their cost — no?

Because prices do not define people. We have a very weak Union movement. Here in the West can’t do that. If, God forbid, the owner will violate the employment agreement, he will be worse than a hired employee. Its the unions just tear in the cloth.

Did you see somewhere that we have the unions seriously fought for higher wages?

The work of man, we have really low valued. But the point is still what? It is valued low because the only “evaluator” of this work is the businessman, who is profitable, so it was cheap.

We have a collective agreement between employers and trade unions. But has anyone ever seen them? Someone they limited that these contracts?

Why us wages are not rising, and unemployment is not growing too much? We have just come to the entrepreneur to the employees and says: “So, next month will get less. Who against — on the way out.”

We are an amazing country — we in the crisis unemployment increased. In principle, the theory can not be.

“SP”: — And that in the centers of employment we do not find a job with a decent salary, it is not surprising? All proposals either for the minimum wage, or at a minimum professional rate…

— Why in the West these centers are seriously working? Because unemployment is high. And if you want you overspending was not, it is urgent to a man to find work and such that he wanted her to go. Otherwise you will him years to pay benefits.

And we have two months to earn three pennies, two months have passed go away from here. Therefore, the employment center, in General, still, you will find people work or not. Center of employment of the economically not interested in his employment. Objectively he doesn’t care. But care not because there are some people, very cruel work, and they just don’t need it.

See also:  Ukraine will establish air links with another country

And it all started with the same — with the fact that initially, people we have very cheap and goods very expensive.

“SP”: — But it means that something in our economic structure fails?

— Of course. Must be a very strong social guarantees. Now, if us unemployment is high, and for violation of the collective agreement, the entrepreneur will have to pay millions in fines, that’s all that we’re talking about will disappear.

The problem in this case that the power saw not only the interests of entrepreneurs. We constantly here this mantra: entrepreneurs provide jobs, so, God forbid, undermine the employer — unemployment is high, the country will perish.

The business has some problems — it is necessary money from the budget to give then it is better not to ask back. Because they provide jobs, they perform a social function.

Here they are and perform. Again, not because the entrepreneurs some evil “crocodiles”, they just convenient and profitable to pay a little, and take a lot.

Entrepreneur in the West no more like people than ours, but it is not profitable to push too hard. If he is passing it to either the unions score, or the labour Inspectorate to the court pull. More it will cost. And we don’t. We have the main thing — entrepreneur to save that life here is so hard. Here he lives, because he’s the only on whose interests the attention.

Senior lecturer, MGIMO-University, political analyst Alexei Zudin believes that Rosstat data indicate that in the economic sphere we are not all safely:

We, of course, came from the “nineties”. But in terms of enhancing the socio-economic and General living standards of Russian citizens, has gone too far.

Much, of course, you can do this by using targeted social policies — which, incidentally, is done. But the main thing — is necessary for sustainable economic growth. Without this, the problem of low living standards and poverty, and on a massive scale, to decide not to work out.

Necessary for sustainable growth. And the results of the survey indicate that there is an objective need for it. It has been around for a long time, and the longer the query of economic growth does not receive an adequate response, the worse the social situation in the Russian society. And this, in turn, will affect the support of key political figures and perhaps the support of the state institutions.

In the Kremlin, by the way, responded to the data of Rosstat about one-third of Russian families who do not have enough funds to purchase shoes, and now you expect from statisticians clarification.

“I find it difficult to comment on that, frankly. Why shoes, why the third, and from these figures”, — said the press Secretary of the President of Russia Dmitry Peskov, when asked to comment on the service.

He also noted that Rosstat would be grateful for clarification of these data.