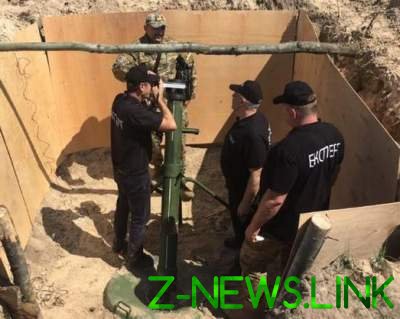 Investigatory experiment has confirmed the version of double loading a mortar.

The strength of mortar Hammer in Rivne landfill was the result of double charging, according to the Ministry of defence on the results of the investigative experiment.

“Yesterday, we conducted a further experiment… and got the following results: during the double loading of mortar rounds and firing the consequences of the destruction of the mortar tube were precisely such as occurred on Friday [6 July 2018] double loading of mortar”, – said the Deputy Minister of defence of Ukraine Igor Pavlovsky.

In General, according to him, investigators have simulated almost all events that could occur during task execution. This used the four mortar rounds.

Defense Ministry spokesman added that all the mortar was transferred to the Kiev Institute of forensic examinations to determine the final cause of the explosion and analysis regarding the structural features of the material from which they are made.

Recall that on 6 July at the landfill in the Rivne region during military exercises the mortar exploded, killing three soldiers, nine more were injured.

The main version of the incident is a violation of the security measures during the exercises, in particular, is considered double loading of mortar.

After President Petro Poroshenko instructed to suspend the use of the teachings of mortars of this type during the period of investigation.