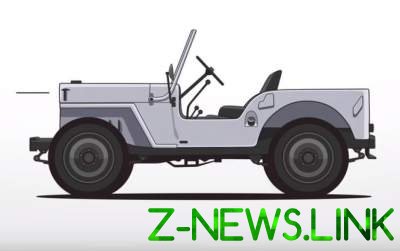 The duration of the video from the first prototypes to the pickup Scrambler, which will show in 2018 that is slightly more than two minutes.

The video includes audio recordings of the various engines of the Jeep and the sound track of commercials in those years. Reporters noted that work Youtube channel and Donut Media allows you to look “at the common features that persist for more than 75 years and changing consumer preferences”.

In 1940, at the request of the U.S. army on a new SUV responded Bantam, Ford and Willys. Willys eventually won the contract in 1941 to build a 16.000 cars for the American and allied forces. In 1945 produced a civilian version of this SUV – Jeep CJ (Civilian Jeep). This model changes were produced by American Motors until 1986.

Chrysler bought the Jeep brand from American Motors in 1987, shortly after the debut of the Jeep Wrangler, and managed to hold the brand, despite its own problems. Despite the change of owners for a long time, Jeep maintains its headquarters in Toledo, Ohio.

Add that the new generation Wrangler will be presented at the motor show in Los Angeles in late November. The SUV gets a 2-litre petrol turbo and a new engine the Pentastar V6. According to preliminary data, it will retain the frame structure, but it has got aluminum body panels.