Home / WORLD / The EU’s decision-making is like the USSR’s: ideology trumps people. Von der Leyen’s stance on the vaccine rollout proves that

The EU’s decision-making is like the USSR’s: ideology trumps people. Von der Leyen’s stance on the vaccine rollout proves that 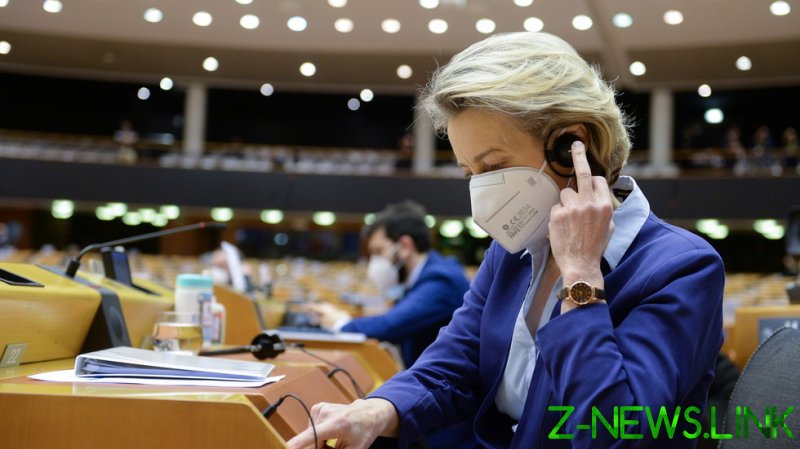 One of the deepest-held beliefs – ‘prejudices’ might be a better word – about the European Union is that it makes its member states stronger. It is in the name of this alleged greater strength that national sovereignty is sacrificed, on the basis that – as Emmanuel Macron claimed again in his New Year address on 31 December 2020 – the stronger and more united the EU is, the better it is for its member states.

I have been arguing for years that the opposite is the case. Apart from being famously bureaucratic and therefore irrational and slow, the fact that the EU remains ideologically committed to common action among its 27 member states in nearly all areas also contributes to a systemic ‘free rider’ problem and moral hazard. EU states systematically seek to offload their internal problems onto others – the Poles offload their unemployment onto Britain, the Italians offload their immigrants onto Germany and Scandinavia, the Greeks offload their debt onto the euro zone, and the Germans offload their gigantic commercial surplus onto the whole EU.

The normal mechanisms that would correct such excesses break down where there is common action. If there were hard borders between Italy and other EU states, those states could close them to immigrants and the Italians would have to deal with the problem more firmly on their own (sea) borders. If Germany had its own currency, that currency would rise with industrial output and make its exports more expensive, thus limiting the country’s massive trade surplus. If France could not use the eurozone to raise even more debt than she already has, she would have to spend less at home. And so on.

By the same token, people are easily convinced that countries will fail if they ‘go it alone’. How will Britain manage, they ask, if it is not in the EU? This fear of being alone has been instrumentalised by pro-EU people for decades and, unfortunately, it is a very effective device, because people are indeed afraid. They have, incidentally, been anaesthetised from taking their courage in both hands and taking advantage of their right to liberty by decades of bogus promises from EU leaders about how the organisation will protect them. The counter-examples of prosperous Norway and Switzerland are simply ignored.

Interestingly, this notion that the EU protects its member states and citizens has survived even the decade-long euro crisis. Whereas the single currency was supposed to protect the eurozone from internal and external shocks, in fact, it encouraged internal shocks and failed to protect the zone from external ones. In particular, it encouraged property bubbles in Southern European countries, especially Spain, in the first decade of its existence because those countries produced unnaturally high returns on investment, the interest rate being held artificially low because of Germany’s needs at the time. When the financial crisis exploded in 2008, moreover, the reckless lending of the previous years, encouraged by the safety net of the euro, meant that European banks had to be saved from the consequences of their own actions to the tune of hundreds of billions of taxpayers’ cash and funny money. Mario Draghi is now apostrophised as the man who saved the euro, but the euro was supposed to save us.

Of course, I have hoped, over these years, that I would be listened to. But I did not expect to be proved right by the president of the European Commission. Yet Ursula von der Leyen, who is getting into her stride as a supremely incompetent manager of Brussels – having shown her incompetence for years as German minister of defence, leaving the army there with no functioning tanks or submarines – has recently made two statements that not only corroborate my analysis, but also make my blood run cold.

The first remark was made in an interview with a number of European newspapers, including the French daily, La Croix. The context was the staggering inefficiency with which Brussels has managed the vaccination programme in the EU, having insisted it should take control instead of leaving it to the member states. “A single country,” Mrs von der Leyen told the journalists, “can be like a speedboat. But the EU is more like a ship. Before concluding a contract [for vaccines] the 27 member states had five days to say whether they agreed. Obviously this slowed down the process.”

She did not mention that Brussels also overpaid: a Belgian minister involuntarily let slip that her country had paid €12 per dose for the Pfizer vaccine, whereas the European Commission, which ordered a massive 300 million doses, reportedly paid €15.50. But the message of her nautical imagery was clear: European citizens had been actively disadvantaged by the EU’s common action because, if countries had ordered their vaccines individually, they would have got them more quickly.

The British press widely reported this speech as an endorsement of Brexit. That did not prevent Mrs von der Leyen from digging herself even deeper into her hole a few days later. In a formal speech she made to the European Parliament on 10 February, the president of the European Commission justified the slowness of the EU ‘ship’ – the Titanic comes to mind – by saying this:

“But let me start with three points of which I am wholly convinced: it was right – and is right – that we Europeans ordered our vaccine jointly and that we are now sharing it in a spirit of solidarity. I don’t even want to imagine what it would have meant if some large Member States had secured the vaccine while the rest went empty-handed. What would that have meant for our internal market, and for European unity? It would have made no economic sense. And it would have meant the end of our Community.”

It is bad enough that she claims that such a decision would not have made ‘economic sense’, in view of what we now know about how much Brussels overpaid. But it is truly shocking that Mrs von der Leyen placed European ‘solidarity’ above the perceived health needs of European citizens. Her statement is a deeply frightening illustration of the fact that the European ideology of unity, and the existence of the ‘Community’ – like the socialist ideology of the old Soviet Union – is what drives decision-making in Brussels, even if these things cause the commission to take decisions that are actively opposed to the interests of EU citizens. There can be no clearer illustration that the EU cares only about itself and not about the people over whom it wields unaccountable power.