Home / WORLD / The EU lied, refugees died: Belarus’ deadly game treats desperate people as pawns. But the West sees them as something even worse 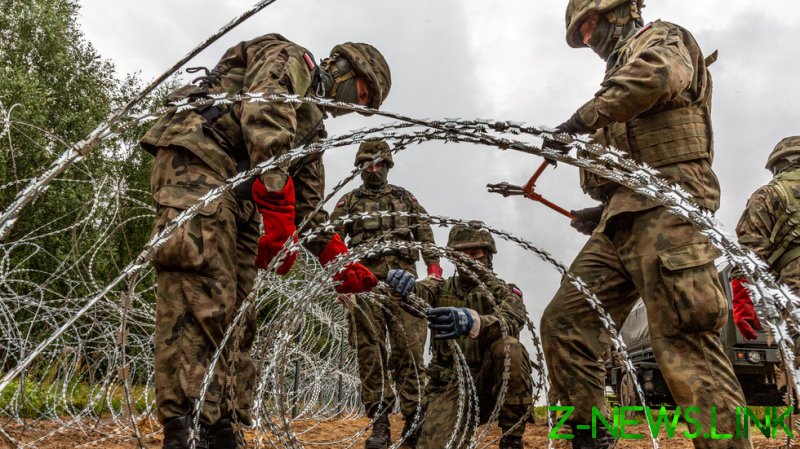 The would-be asylum seekers have unwittingly become pawns in a wider geopolitical game. EU states, which stand accused of turning back desperate people along the frontier, have alleged that the Belarusian government has laid on flights to troubled destinations such as Iraq and Afghanistan and is now ‘weaponizing’ refugees to create a border crisis for Brussels. The lives at stake, however, have received little sympathy.

At around the same time as the bodies of the four people who had dreamed they would be welcome in Poland were found, the country’s president, Andrzej Duda, gave an address to the UN General Assembly in New York. The contrast is stunning.

Duda made a special point of lecturing his global audience on the merits of “solidarity,” and was clearly trying to cash in rhetorically on the name of the Polish trade union movement that resisted Communism in the 1980s. And not just any solidarity, but that between the wealthy global “North” and the neglected “South.” Tying himself into a bit of a geographical pretzel, Duda even claimed that the “North” had let down Ukraine – apparently now part of the “South,” if you ignore its location, economy, and massive privileges of Western support – over the Nord Stream 2 pipeline that Polish conservatives can’t stop bemoaning.

And also at the same time, actual people from the real Global South were being systematically abused in a deadly game of chicken between Belarus’ embattled autocrat, Alexander Lukashenko, and Polish nationalist populists. The essence of the row is simple: Lukashenko, unhappy over EU pressure on his domestic crackdown on the opposition and increasingly repressive rule, is trying to use migrants to deliver payback by encouraging or compelling them to cross the border into the EU – that is, Poland, as well as Lithuania and Latvia.

The countries he has reportedly targeted in this manner have responded by locking down their frontiers with fences and troops and by, declaring states of emergency. Lithuania and Latvia did so first. Poland followed at the beginning of September, severely restricting the media and the civil rights of its own population in the significant area bordering on Belarus.

This is a clear over-reaction that contradicts the spirit and the letter of Polish law, which reserves a state of emergency for – unsurprisingly – emergencies. That is, situations that pose far greater challenges and cannot be dealt with by ordinary means.

The Polish measures, undertaken by a government with a well-deserved reputation for repeatedly undermining democracy and the rule of law, reek of panic-mongering and nationalist populism. They have come with the rhetorical cover you would expect: Lukashenko’s dirty tricks are denounced as a “hybrid war,” thereby invoking the dire necessities of wartime in a situation that has nothing to do with it. Here, Polish conservatives follow in the footsteps of the US, with its dishonest “wars” on drugs and on terror.

And, just as in the American case, one big lie requires more to be added to it: Polish government members have indulged in hyperbole, presenting their intransigence towards the migrants as protecting all of the EU from a non-existent great migration crisis (and, as if in passing, darkly warning of the also non-existent dangers emanating from pre-scheduled and transparent Russian-Belarusian military maneuvers).

In reality, the Polish state of emergency has made it easy for the authorities to impede the work of those Poles who do care for refugees, restricting the access of not only the media but also activists and NGOs, such as the Ocalenie Foundation, which are trying to help them. In particular, a group of 32 refugees from Afghanistan who have been stranded in inhospitable terrain and under very harsh conditions near the village of Usnarz Górny, between Poland and Belarus, for more than 44 days, and counting. According to the foundation, which has managed to stay in touch with the group despite its deliberate isolation by the state of emergency, their plight is now “dramatic.” They are surrounded by barbed wire on all sides, weak with hunger, cold, and in despair. At the same time, Polish border guards have repeatedly prevented doctors and UN representatives from reaching them.

Poland’s president, Duda, meanwhile, has used the same speech in which he held forth on “solidarity” to insist that his country will stand firm and not give in to what he called Belarus’ “instrumentalizing of migrants” and the “use of their difficult situation” to endanger the safety of the Polish border.

Perhaps rankled by some, far too reticent, criticism of his country’s brutal course, or perhaps aware that the UN presents a very different audience from the one he faces at home, Duda was clearly trying to signal at least some recognition of the migrants’ suffering. Yet words are cheap. In reality, there is a glaring contradiction that makes his talk hypocritical: It is impossible to both stay firm – that is, to continue Poland’s current policy – and to do justice to the humanity of the victims of both Lukashenko’s strategy and Poland’s response.

Poland is, of course, by no means alone in betting on deterrence by brutality. The US has done so for a long time, and the current scandal over the treatment of Haitian migrants stranded in the small Texan border town of Del Rio shows, once again, that this attitude is bipartisan: Despite his promises to do better, when the going gets tough, President Biden uses the tools of his predecessor Donald Trump, even if both the Democrats and the opposing Republicans pretend otherwise, for obvious if different reasons.

The EU as a whole has a nasty record of abusing migrants and letting them die, rather than letting them in. This year alone, for instance, almost 1,400 migrants have already lost their lives trying to cross the Mediterranean, continuing a steady trend that reached a peak in 2016, with 3,557 estimated deaths. After a history of scandals over harsh camps, Greece has just opened a facility that critics describe as akin to a prison.

In that sad sense, both Poland and Belarus, one inside and the other outside the EU, turn out to be really very European: ruthless and bereft of compassion. For the migrants lost between them, exhaustion and hypothermia were the immediate causes of death, yet politics is the fundamental one. And these lethal politics are produced by both governments together. The last thing a Polish president should dare to speak about right now is solidarity.