Home / WORLD / The end of American power: Don’t blame Trump, and don’t expect Biden to save it either 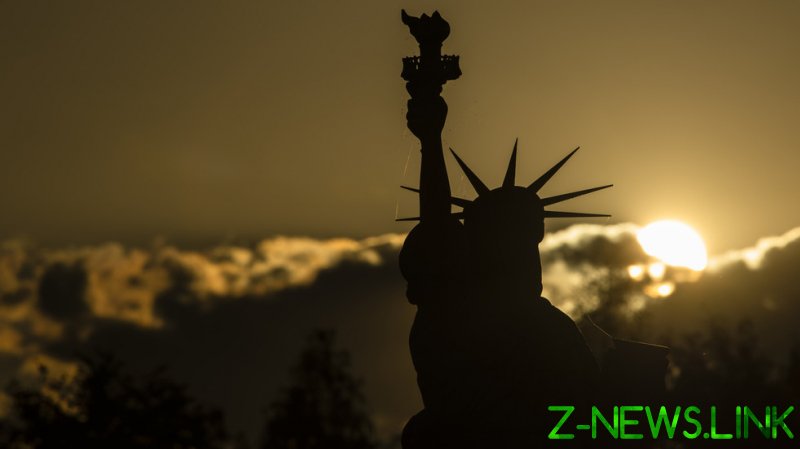 The error in such thinking, however, is to blame it all on President Donald Trump for being some kind of rogue leader, with the implication that if Democrat contender Joe Biden were to win the White House next week, then, happily, the historic decline in US global power might be reversed.

In the current issue of Foreign Affairs, the elite journal for US establishment debate, an article by Eliot A. Cohen titled ‘The end of American power’, argues that “Trump’s re-election would usher in permanent decline.”

Cohen claims that if the Republican president is re-elected, his “erratic approach to leadership and disdain for allies,” would “permanently tarnish the United States’ reputation for stability” and “return to a world that has no law other than that of the jungle – a world akin to the chaotic 1920s and 1930s but worse than that, because there would be no United States out there on the periphery ready to be awakened and ride to the rescue.”

This is typical self-flattery of American “exceptionalism” and mythological beneficence. “Return to law of the jungle” under Trump? Not when Obama was bombing seven counties simultaneously? Or when any other US president since the end of World War II exercised a prerogative to launch wars without a UN Security Council mandate, from Korea to Vietnam, to Afghanistan, Iraq and many more besides?

The Foreign Affairs article doesn’t actually endorse Biden for the presidency, but the implication is that all of America’s current woes, nationally and internationally, will be dispelled by ousting the brash, uncouth Trump from the White House.

If only it were that simple. What needs to be realized is that US global power is failing and that is an empirical process over several years regardless of which one of the two main parties own the White House – or the Congress for that matter.

The decline is chronic, systematic and structural. The body politic of the US is moribund, no longer able to reinvigorate by satisfying the demands and needs of its population. That impotence is a dysfunction of its so-called liberal political system dominated as it is by powerful corporations which control the politicians for elite interests, not those of the majority working population. That atrophy is in turn a dysfunction of American capitalism. Neither of the two parties are able or willing to fix it because they are endemic to the system. This is not just an affliction of the US. European states also share the predicament, albeit with less global consequences.

The American Century or Pax Americana is turning into “Pox Americana.” Traditionally, the sense of US global dominance has relied on three pillars: economic, military and cultural power.

While the US still retains undoubted military strength, the other pillars are eroding. Some pointers include:

1. The economic rise and surpassing of China as the world’s number one economy. Chronic trade deficits indicate the US is no longer a productive economy but one characterized by stock market financial wheeling-dealing divorced from the real world inhabited by most citizens.

2. The once mighty US dollar is no longer the sole currency for international trade. Russia, China and other Eurasian nations are moving towards using national currencies for exchange.

4. US exhortations to other nations to obey its political demands, such as sanctions on Iran at the UN, are increasingly ignored. That speaks of weakened moral and political authority.

5. Numerous statements from European leaders (Merkel, Macron) indicate a loss of confidence in the US as a traditional leader. While Biden may talk about restoring America’s alliances, it is by no means clear if transatlantic bonds can be repaired.

6. Studies show unprecedented collapsing social conditions in the US, from indicators of human health to civic infrastructure. These are hallmarks of past empires undergoing collapse.

7. Several nations are openly defying US bullying despite the wielding of sanctions. In addition to major powers China and Russia, small and medium-sized nations are also increasingly ignoring Washington’s threats, including Bolivia, Nicaragua, Syria and Venezuela, joining long-time resisters like Cuba, Iran and North Korea. American impotence to bend other nations to its will is becoming more apparent. Its futile use of sanctions to coerce nations is only rebounding to further undermine its global image, betraying pretensions of virtue with a more accurate image of an insufferable tyrant.

8. The abysmal mishandling of the coronavirus pandemic in the US compared with say, China or South Korea, is a graphic illustration of systematic power outage. The US does not have political or financial resources to properly deal with the crisis which exposes systemic weakness.

9. The political polarization within the United States speaks of unbridgeable divisions in a population of 330 million to the point where violent unrest and even civil war is feared. The implosion of common political ground fatally undermines the trust in governing institutions, including the media. This concurs with a recent article by Slavoj Zizek who argues the functioning limits of liberal democracy have been reached in the US. Something radically different is required, but there is so far little consensus among citizens about what that entails.

10. Social protests against economic inequality, racial injustice and police brutality – as well as counter-protests – are not going to go away simply on the election of Biden over Trump. As Helen Buysinki commented, the protests are likely to continue and grow because of the dysfunctional US political system’s inability to respond to democratic demands of the populace. This social-political quagmire speaks too of gridlocked American power.

Economically and culturally, the US has seen its pillars of supposed power erode. But that decay has been underway for years if not decades before the arrival of Trump in the White House. In that way, Trump is more symptom than cause. And the election of Biden is not going to change the downward dynamic because he and his Democrat party are part of the same bipartisan duopoly that serves the plutocracy of the United States.

Even the third pillar of power, the formidable US military, is hardly invincible. With about 800 bases around the world, the military juggernaut has sucked the lifeblood out of the civilian economy with its record budget-busting annual spending, currently over $700 billion – far exceeding even the height of the Cold War years.

Trump, Biden, Republicans and Democrats are locked into a failed political-economic paradigm of shilling for militarism and foreign aggression, creating bankrupting wars. Indeed, Biden could be even worse than Trump given his belated hawkish rhetoric about Russian being “our biggest threat.”

America’s declining power is a thoroughly bipartisan affair. Both parties are prostitutes for big business, Wall Street, the military-industrial complex and lawless warmongering. All of that has led to the collapse of America as a global power from its ruinous corporate capitalism and imperialism.