“The employee stepped on my chest” 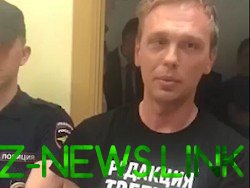 The video, as Ivan Golunov shows the traces of ill-treatment by the police

Special correspondent of “Medusa” Ivan Golunov, the suspect in the production and sale of drugs, showed scratches and bruising on her back and complained of ill-treatment by police. As told by a member of the Council for human rights eve Markachev, the journalist said that the police twice punched him in the head and once stood on the chest, but the marks of this community are not recorded. This was reported on sitesuite.

He Golunov is demonstrated in the video Mash scratches on the back, adding that “an employee in a burst of something came to [him] in the chest”, but the traces of this are left, only “soreness”.

“When I asked you to provide me a lawyer, I had some clashes with security officers. Today came the ambulance, which recorded some bruises, bruises and so forth,” — said in the video the journalist. At the beginning of the shooting, he was handcuffed to the policeman.

Markachev added that the Council on human rights appealed to the Moscow Prosecutor’s office and the Department of the MIA of Russia in Moscow with a request to check the legality and validity of actions of the police during the arrest, and also to take the matter under their control. Representatives of the Moscow Central Board after meeting with Holonovel assured Markachev that verification by internal security had already begun.

The verification confirmed Znak.com Executive Secretary of the UPC of Moscow, Ivan Melnikov. He also added that, according to the explanation of the Golunova, he suffered abrasions on the back, “when he refused to comply with police officers in the hospital where he was taken for passing the necessary tests”.

According to Melnikov, Golunova offered food and drink, but he refused in order to avoid provocations and because of stress do not want to eat. “We asked, despite the fact that he doesn’t want to have to provide promptly Golunova food from relatives through the lawyers,” — said the press Secretary of the Moscow ONK.

See also:  Rosstat made a prediction about the population decline in 16 years

Measure Golunova plan to vote tomorrow, June 8, at 9:00, the head of the international human rights group “Agora” Pavel Chikov with reference to the lawyer of the detainee Dmitry July.

We will remind, against Ivan Golunova has opened a criminal case under article 30 and article 228.1 of the criminal code of Russian Federation (“Attempt at illegal production, sale or shipment of narcotic drugs”). “Medusa” bind Golunova persecution with his professional activities.

Earlier in GU MVD in Moscow found that only one out of nine published on their website photos taken in the apartment Golunova. The rest of the photos taken during the operational activities “to curb the activities of groups of individuals involved in the sale of drugs in the Moscow region, in connection with which the detainee is checked.