The effect of “healthy eating” was equal to zero 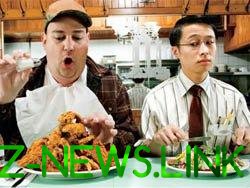 Everyone knows what a healthy diet: more vegetables and fruit, less meat and sugar. But in fact, scientific evidence that such recommendations are correct, no.

The Austrians need to fix their own health. Organizing the campaign “Make the first move!”, “turquoise blue” the government encourages the population to lead a more healthy lifestyle. “Often people lack the necessary basic knowledge about healthy eating,” — said on this occasion, the representative of the Ministry of health

There seems to be no doubt that it means. The “food pyramid” shows “what should be ideal food habits”. The most common recommendation: five servings of fruits and vegetables, four servings of grains, rice or potatoes a day, vegetable fat, less meat and sugar.

But whether we are to live longer, and can this protect us from cancer or heart attack? These issues were covered in the study, organized by the “Initiative for the protection of women’s health” (Women’s Health Initiative, WHI). The experts examined in particular the effects of nutrition on the occurrence of cardiovascular diseases, breast cancer and bowel, as well as for mortality in General.

For eight years, almost 49 thousand women aged 50 to 79 years participated in the study. Half of them received intensive care, influenced by their food habits. They ate healthy food, less fat and more fiber, vegetables and fruits five times a day. The second half was fed the usual way.

See also:  Dog eating a cucumber, has become the new star of the Network. Video

Sobering result: the effect of “healthy eating” was equal to zero. Survey results participants from both groups did not differ on any of the control parameters. “The food pyramid trying to tell you the truth about nutrition, which, however, simply does not exist”, — summed up the interim results of the study Meixner Yana (Jana Meixner), an employee of the Department of science and evidence-based medicine of the Danube University Krems.

According to the researchers, the much-vaunted “Mediterranean diet” that includes plenty of vegetables, fish and olive oil, is nothing more than a myth about healthy eating. Spanish explorers four years watched 3541 old man on the subject of diabetes of the 2nd type. Some of these people continued to eat in accordance with their years of habits, and the rest adhered to the “Mediterranean diet”, when the main source of fat becomes olive oil. 8.8% of the people from the first group became ill with diabetes of the 2nd type. In the group who consumed a lot of olive oil, cases was 6.9 percent. Thus, the risk of disease decreased by only 1.9%, which can be called only a very small fraction.

So what happens — no matter what we eat? No. Most studies in the field of nutrition do not allow definite conclusions on cause and effect, but on the basis of several detailed review and metaanalytical works it is possible to formulate a number of sensible tips. So, it is proved that TRANS fats increase the risk of cardiovascular diseases. They usually occur under artificial hardening of liquid fats, which are found primarily in processed foods and fast food. Another “suspect” — saturated fatty acids contained in the melted fat, meat and milk. If you reduce their consumption and eat unsaturated fatty acids, it is possible to somewhat reduce the risk of heart attack.

Thus, it makes sense to limit the consumption of processed meat. The currently known results studies have shown that salty foods and sausage increase the risk of colon cancer. It is also known that sugar-free lemonade is not to be considered a suitable alternative to water. One who for many years, drinking a large quantity of such treatment, some more than others at risk of developing diabetes of the 2nd type.

Ian Meixner concludes: “Optimal nutrition for all does not exist, but the risks associated with unhealthy diets, are often underestimated”.