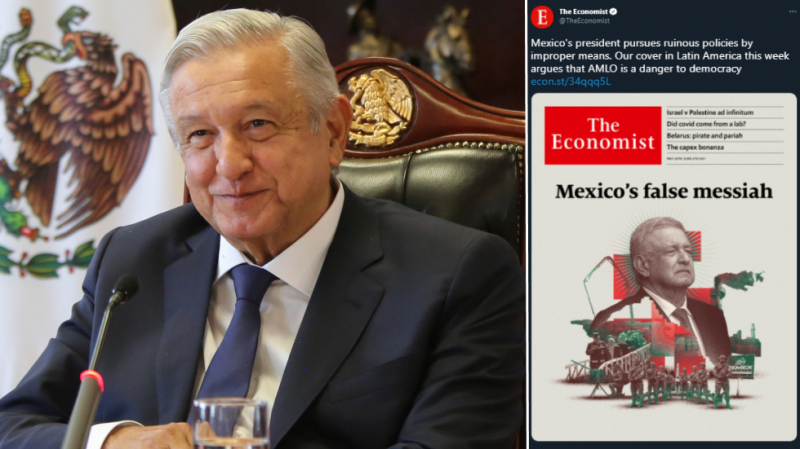 On Sunday next week, Mexicans will be electing hundreds of legislators and other state and local officials. They should absolutely not vote for Morena, the party of incumbent president Andres Manuel Lopez Obrador, popularly known as AMLO. That is the opinion of the British weekly newspaper The Economist, which has just published a highly critical article about the man and his policies.

The piece labeled AMLO “Mexico’s false messiah,” claiming that he is “a danger to Mexican democracy” and that his power needs to be curtailed. The magazine brought up several arguments to back the stance, saying, for example, that the president “calls a lot of votes, but not always on topics that are best resolved by voting.” Holding a referendum to measure public support for a “pet project” or for a decision to prosecute former senior officials on corruption charges is, according to The Economist, “a stunt” and “a mockery of the rule of law.”

Mexico’s president was also accused of having “disdain for expertise” and “a love of ideas that have been tried and proved not to work” – like pushing private capital out of hydrocarbon extraction, electricity generation and distribution, and railroad transportation, or deploying the military to build infrastructure projects.

The Economist acknowledged that AMLO is not personally corrupt, unlike “much of the ruling class” in Mexico, and has done a lot of good for the have-nots. But nevertheless it said voters have to deny him a parliamentary majority for the remaining three years of his presidential term, because he is “power-hungry.” Washington could possibly be of assistance, the piece suggested.

The message seems to be taken with skepticism by the president’s supporters. Some pointed out that The Economist was not particularly original in its religious-themed description, borrowing it from the Spanish-language publication Letras Libres.

Others suggested the British magazine clearly had an agenda that had little to do with the well-being of the Mexican people and much to do with the return on investment for international corporations. After all, the big business-friendly platform of Mexico’s previous president, Enrique Pena Nieto, received glowing reviews from the Western press. Pena Nieto left office in 2017 with an approval rating of just 12%, leaving behind an economic crisis and paving the way for AMLO’s win of 53% of the popular vote during the following year’s presidential election.

Many thought the best response to the attack from Britain would be humor. The cover of the issue was re-edited to push back against its core message, to ridicule it or even to serve as a pro-AMLO campaign poster.