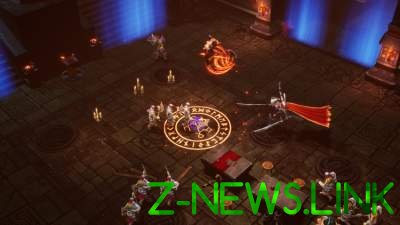 The action of the Pagan Online is set in a universe inspired by Slavic myths.

The Belarusian company Wargaming and the Serbian Studio Mad Head Games has announced the release of the action role-playing Pagan Online early access. The game can be purchased on Steam and Wargaming.net.

The action of the Pagan Online is set in a universe inspired by Slavic myths. Passing a campaign (there are three difficulty options), players will face hordes of monsters and terrifying bosses. There are additional modes, challenges and awards. The more you pump all of your characters, the more challenges you will unlock.

“For over a year we have created a decent Foundation that will give a clear idea about our intentions,’ said Jacob Butler (Jacob Beucler), Director of product Pagan Online. – We want to develop this Foundation, adding that players need. And early access is the perfect mechanism for this. How much time we spend in early access, will depend on how the players will appreciate the game. Now we think that we will emerge from early access to full release this year”.

In the earlier version, players will get access to eight characters with their own abilities and styles, as well as three levels of difficulty progress through the story campaign, which consists of five acts. In addition, there is a scoring system Heritage (allows faster swing), the creation of objects and the Pantheon (the Central location where you can meet other players). Of activities: daily assignments, weekly events, mission, hunting and eliminating. Also characters can change the appearance and emotions.

“We respect the laws of the genre and appreciate the spirit of the old school. However, in this genre on the edge of the crowded games that you can play with your monitor turned off, said Yaropolk rush, Director of the publishing directions Pagan Online. – We’re going to get action in Action RPG. We would like to avoid the “trap seer” and not make the game that you will only understand after 30 years and will contribute to the textbooks. We want a lot of people enjoyed the Pagan Online now. And in order to successfully balance between the visions of the future and reality of today, we need a direct relationship with the players.”

The participants of the early access relies exclusive reward in the form of a pet-companion Archmage Wodward. If you take it with you into battle, then the monster will give 7% more gold.

If you wanted to play with a friend, Mad Head Games promises to provide this capability in the near future.