The doctors handing out the brooms and sent to the wipers 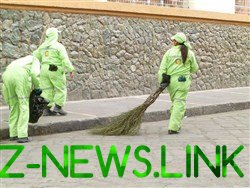 People in Russia have already agreed to work for food, but for such work the high level of competition

The Russians have lost all hope with dignity to earn and willing to work for low wages, the study prepared by the Federal employment service (rostruda). The experts analyzed about 840 thousand summary and made his map in the payroll preference for regions.

It turned out that most want to get in the Chukotka Autonomous area and Magadan region — about 50 thousand rubles per month. Residents of Moscow and the Sakhalin region willing to sell labor for 45 thousand. In Chuvash Republic the applicants are willing to settle for 17 thousands, and the Crimea — 20.

This is considerably lower than the official reports of Rosstat on average wages. For example, in Moscow this figure is 80.8 thousand. By this logic, the capital’s residents want to get a job with a salary almost twice lower than could potentially obtain. And not always talking about low-skilled labor, requires no special skills. Sites for job search you can often find a summary of the people with good experience and a high level of knowledge.

A typical Declaration from the applicant, where he is trying to present itself in all its glory, usually looks fairly solid. Male, 40 years old, higher education, numerous training courses, the experience of the organization of own business, worked as a head of Department. In the column of the desired salary is just the same 45 thousand.

Explanation of this fact can be two. The first — in recent years, society has formed a certain psychology of poverty. Potential employees, despite experience and qualifications, do not believe in their own strength. They say, though, that Moscow is a city of great opportunities, but while you’re trying to find a good position, the family will simply starve, and therefore do not need to bargain and settle. In the end, our ancestors have survived worse.

The second explanation — people know the real situation and realize that the opportunities to live a better life objectively, no. Just to what extent you can lower your own needs?

Head of the Center for political and economic research Institute of the new society Vasily Koltashov low requests applicants to explain them the injustice to employers:

— If we analyze the data of the Fes and to continue the logic of our liberal officials, it turns out that people in summary call some ridiculous salaries that are below average in the region. Say, people underestimate themselves and the polls are dumping on the labour market, could earn more, but don’t want to. Such is the logic of our officials.

But the situation is quite different. The average salary in the economy is much smaller, which officials derive as a medium to calm the citizens. People claim that they are unable to pay and often even ask for more.

But in the same Moscow there are good opportunities for self-realization.

— The labor market in the hands of employers. In the period from 2010 to 2013, the employee could still dictate some of his conditions, albeit to a small extent. But now the wages dictated by the employer. He does not want to pay more even in Moscow, says: “We will pay you 45 thousand and be happy, can not accept.” And this is still a good amount, although subject to revisions. And there is nothing it is easy to change, one is taken the employee is not able to change the situation. If this employee is easy to blame that he is lazy.

Our officials like to say that people don’t want to make good money and give you an example the average wage. These words cause the greatest indignation in the society, just rage. People know that they do not work for the money that I wanted to.

Not all specialties can hire random people, the man in the street will not hire.

— When the market was in the hands of the workers people could fight for higher wages, and changing the position. For example, a person worked as a Manager, then a job as a Department head, then thought about a managerial position. People were not afraid to storm the heights, and they took them. Because intelligent Manager with experience why not take a Department head?

But now for the position of head of Department is a queue of applicants. The employer everywhere requires previous experience, and very narrow. For example, people working in insurance companies and wants to get to the firm that these companies serve. And him already being a failure, but log-in in just two weeks. But the employer does not want anyone to teach, he needs a ready-made expert on a narrow topic. This fracture in the labour market occurred in 2014.

Today is a very big competition for jobs. Not to mention the fact that many of the vacancies fake, that is long closed, but posted for formal reporting.

But 45 thousand in Moscow for a family man that lives hand to mouth..

For a young man who has no family and lives with his parents, 45 thousand is quite enough to sit in Catechetic to buy normal clothes and gadgets, to consumer lifestyle. The employer moved the bar in favor of these applicants. Family people really have to take a job that barely provides for survival. And people will still be happy to 45 thousand, not 30.

See also:  Huge asteroid will fly near the Earth

The President of the Union of businessmen and tenants of Russia Andrey Bunich believes that in the near future on the labour market situation could be repeated in the “nineties”:

— We have in many areas attracted many workers due to low productivity. Save on the automation of work, no one makes a long investment, because entrepreneurs are afraid of losing investment. We all live one day and therefore save due to the intensification of low-productivity labor. It is clear that if invested in high-tech places, there would be other salaries. Prefer not to invest in the future, but just to squeeze the last drop of the workers.

Of course, this hinders the innovative development of the economy. Working conditions do not improve, taking into account new technologies, automation, everything is saved on the ancient level. And you can hire people with low levels of education, with small queries.

In a more competitive environment such as IT, greater remuneration and motivation of employees. There already looking at the fact that people had the opportunity not to think at work about how to hold on to salaries and how to run around stores in search of cheap products.

But do not forget that even in Moscow there are many companies, which only formally can be attributed to the business. In fact it is ruled by the feudal system. The lowest stratum of workers should be considered as bonded. For example, in the housing sector, where there is no competition, but there is wage manipulation at the grassroots level. And such jobs are many. The tip distributes itself windfall, and the other holds a black body.

— To what extent can fall off the labor market?

In the early 1990s, people with doctoral degrees were sold in the markets, wipers worked. We are now close to this state, just the economy is falling not as fast as in the time of the collapse of the state. But now nothing is being done to rectify the situation.

The Russian economy is not developed, and archaizing. Economic relations do not go in the direction of our time, increase our competitiveness, create high-tech industries. On the contrary, everything is moving to monopolize and most importantly — simplification. The government translates this top-down trend. But if everything becomes simple, then the labor market is ruled by the stick and the whip. All directed to people just to survive.

So we can see how people with higher education will work for food, standing in the porch. And this is the most likely prospect.