Home / WORLD / The Devils you know: Belgium dump Ronaldo & Portugal OUT of Euro 2020 after Thorgan Hazard stunner – but lose De Bruyne to injury

The Devils you know: Belgium dump Ronaldo & Portugal OUT of Euro 2020 after Thorgan Hazard stunner – but lose De Bruyne to injury 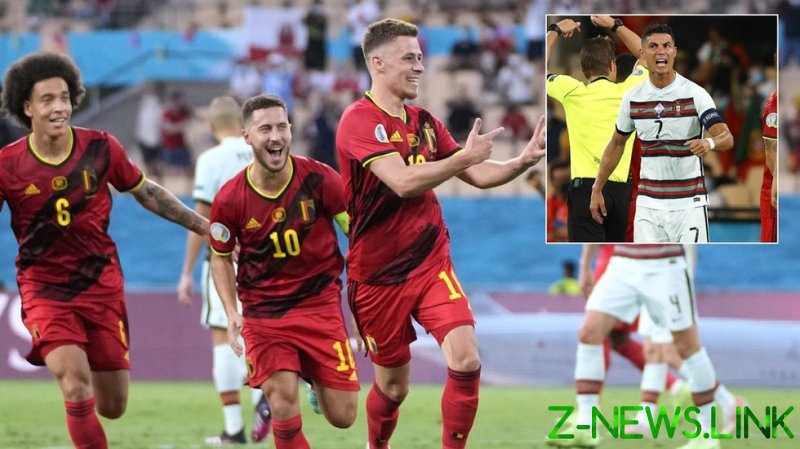 With his older brother Eden still yet to hit the back of the net for the Red Devils in 20 months, Thorgan Hazard scored the winner late in the first half.

Beating Rui Patricio with a bending shot, he sent the Wolves ‘keeper the wrong way from outside the 18-yard box.

With Renato Sanches getting the nod this time from Fernando Santos, Portugal began brightly with Diogo Jota latching on to a ball between defenders but failing to hit the target.

Midway through the first half, the ex-Bayern Munich midfielder shot from distance and was even further from troubling Courtois’ goal.

Then on 25 minutes, Ronaldo forced Courtois to parry with the free kick as his partner Georgina Rodriguez watched on from the stands, but the headed rebound couldn’t be kept down by Joao Palhinha.

With half time approaching, Hazard became the hero of the evening by letting rip from the top corner of the 18-yard box and sending Patricio the wrong way with one of the strikes of the tournament.

Early in the second half, Kevin De Bruyne was brought injured with Ronaldo complimented for his sportsmanship in checking on the Manchester City playmaker off the field.

Looking for a solution, Sanches made a double substitution in bringing off Joao Moutinho and Bernardo Silva for Bruno Fernandes and Joao Felix.

Portugal were better as they pushed for an equalizer, with Ronaldo playing a lovely ball into Jota’s feet in the box that he again failed to convert.

In total, the defending champions had 23 efforts without a return which was a tournament record.

As Felix was on target with a header and later hit the last attempt of the game just past the post, Raphael Guerreiro came closest when hitting the post in the 82nd minute.

Like Ronaldo in the Euro 2016 final won against France, De Bruyne made a good coach from the sidelines cheering his teammates on, who had good chances on the break but were halted by a stubborn Pepe booked at one point in the proceedings.

As Roberto Martinez’s men held on for the win, Portugal crashed out in the last 16 as Belgium will now face Italy in Munich on Friday.