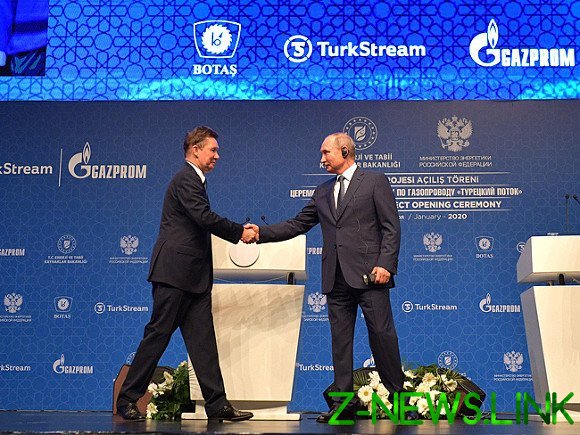 Development strategy of Gazprom, focused on the development of export supply at any price, actually failed. A monopoly has spent more than $30 billion only for the laying of export pipelines, not counting the cost of creating the related infrastructure.

The construction of “South stream” in 2014, stopped on Bulgaria, who refused from cooperation with Russia after the annexation of Crimea.
The construction of “Turkish stream” rested in the unwillingness of Turkey to build a powerful pipeline: Turkey has cut the planned capacity of 2 times, but they were not needed. Turkish consumers often prefer gas from Azerbaijan and LNG imported from around the world. In the end, even the old “Blue stream” was loaded only by two-thirds. What to do with the new “Turkish stream” is not clear. There is no clarity with the European thread. The contract is available only with Serbia, but this is 2 billion cubic meters.

An alternative to trying to make the gas pipeline “Nord stream-2”, which supplies gas to Germany, and “Power of Siberia”, which supplies gas to China. “Power of Siberia” was supposed to be another illustration of the diversification of consumers and reversal of “Gazprom” in the East. But these projects fail because of administrative errors. Laying of “Nord stream-2” cost “Gazprom” in 4.15 billion euros for the offshore part and 1.1 trillion rubles for the creation of ground infrastructure. The trouble is that to implement the project, the gas monopoly has started, without waiting for the permission from Denmark to work in their territorial waters and not having their own technology. The result of the us sanctions, and threatened the Swiss company Allseas, construction stopped at 160 km from the finish. Western sanctions were not as harmless as we are told by propaganda.

With the “Power of Siberia” was also ridiculous. The desire to quickly begin marketing in China has led to costly mistakes. The pipe was built over 450 billion rubles, mastered expensive Chayandinskoye field (7 billion rubles). This required the construction of the Amur gas processing plant over 950 billion rubles. However, because of errors in exploration and disorders in the development of the field, 20 wells of the Chayanda field do not give gas, and fill the “Power of Siberia” is nothing.
Really pleased with the contractors — “stroygazmontazh” Arkady Rotenberg and “Stroytransgaz” Gennady Timchenko.

2019 to dot the “i”, revealing a lot of problems: the lack of own technology, the inexplicable choice of the most expensive projects, politicized craving for unpromising export projects in urgent need of gasification of Russia.

And yet each of us, paying for heat, gas and electricity at the same time partially funded and ambitious, but failed project of “Gazprom” and high salaries of its top managers.