Home / Game / The developers told about the first clan of Vampire: The Masquerade – Bloodlines 2

The developers told about the first clan of Vampire: The Masquerade – Bloodlines 2 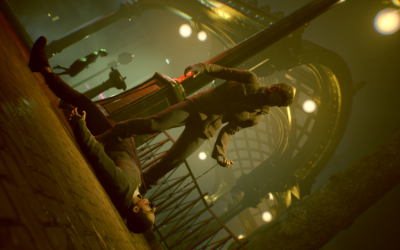 Bruch is a full-blooded clan of rebels and instigators.

The company Paradox Interactive spoke about the first clan of Vampire: The Masquerade – Bloodlines 2 – Bruch.

Bruch is a full-blooded clan of rebels and instigators, who recognize only force. But the other vampires don’t like – call the Mob, because Bruch is not active in the common life of the kindred of Seattle. Furthermore, this clan likes to make fight clubs for the undead, and his representatives, including former followers anarcho.

Clan members do have great power. Players who join him, will be able to unlock two ancient disciplines: “Power” and “Swiftness”. The first is the basic discipline Bruch. It fills the body of the vampire supernatural Relatives. “Swiftness” adds speed and allows you to attack, Dodge and run faster than anyone else. Using these abilities in front of mortals violate the “Masquerade”.

Read more about disciplines Bruch below:

“Fist of Cain” – allows the vampire to inflict devastating attacks that can bring down walls or lift enemies high into the air. After several improvements the ability “Fist of Cain” you will find a truly indomitable power.
“Shaking the earth” – hitting the earth with such force that it formed a wave that deals damage and throws away all who dared to get too close. Improving the ability to “shake the earth”, the vampire Bruch can split the earth under the feet of an enemy, dealing him more damage.

“Invisible storm” is accelerating in any direction, allowing you to instantly disappear from sight of the enemy. So you can attack from behind, Dodge enemy attacks or to slip away before the dust settles. Subsequent improvements enhance the effect of the ability of the “Invisible storm”.
“Acceleration” – allows you to move so fast that it feels like the whole world around stops. Enemies freeze and not completing the attack, the machine is barely noticeable crawl forward, bullets flying too lazy, and your vampire can do incredible stunts by playing on the background synth music of the eighties, like in any spectacular action. Subsequent improvements enhance the effect of the ability “Acceleration””.

Vampire: The Masquerade – Bloodlines 2 will go on sale in the first quarter of 2020 on the PC, Xbox One and PlayStation 4.