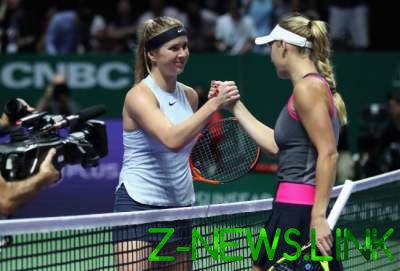 The first racket of Ukraine Elina Svitolina unexpectedly failed in the first match of the group stage of the WTA Finals in Singapore.

At the Final tournament Svitolina kicked off with a match against eks-the first racket of the world Caroline Wozniacki, who has won each of the three face-to-face meetings, including the finals in 2017, at tournaments in Dubai and Toronto.

The match lasted only 58 minutes, and ended in a crushing victory for Wozniacki. Danish has implemented each of the five earned break points, but Svitolina missed your only chance to take the flow of the opponent. Elina made 18 unforced errors, with 10 actively won balls. Wozniacki allowed himself only five errors, which more than compensated for the 16 winnercom.

See also:  The devastating earthquake in Iran: many victims

In the second match of the red group first racket of the world Simona Halep took a convincing revenge against Caroline Garcia for the recent defeat in the final of the tournament in Beijing. Romanian made four breaks of serve and his serve played 5 out of 6 break points.

Wednesday, October 25, Elina Svitolina will play against Caroline Garcia, Caroline Wozniacki and Simona Halep will fight for the leadership in the group.