Home / policy / The default-2020: “the State may withdraw deposits from the public to balance the budget”

The default-2020: “the State may withdraw deposits from the public to balance the budget” 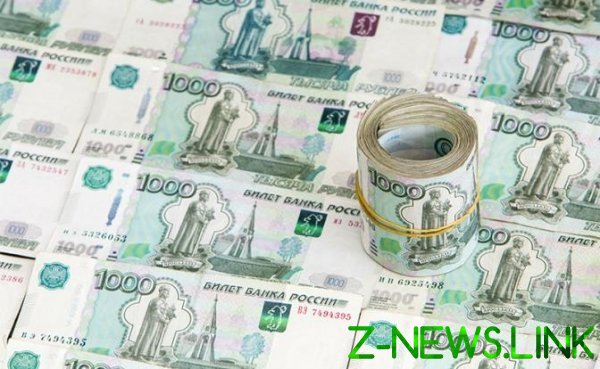 Funds of the national welfare Fund may be enough for Russia just two years, if the price of Urals crude oil will not rise above $ 15 per barrel. To such conclusion analysts of the German Deutsche Bank, analyzing the balance of payments and NWF. In March liquid part of the NWF totaled $ 150 billion, but this amount should be reduced to approximately 120 billion after the purchase of the government shares of Sberbank from the Central Bank.

At current exchange rates liquid part of the FNB equivalent to about $ 9 trillion. rubles. If Russian oil is more expensive and will cost at least $ 30, the reserve funds will be sufficient to cover the deficit of oil and gas revenues for about six years, analysts write.

But while Urals crude fell far below these marks. 21 APR barrel Russian varieties cost only 11.59 USD. This was the lowest value since March 1999, when the price dropped to 11.74 USD. However, April 1 was recorded even lower price — $ of 10.54 per barrel. Note that the Urals on the stock exchange not traded, its value expect the company Argus, and Platts Refinitiv.

On Thursday, 23 April, the Bank adjusted the fall, but still remained at low levels.

After a collapse of quotations of the Russian Minister of energy Alexander Novak urged not to dramatize the situation, but the problem is that demand for oil may not recover until the end of the year, as reducing consumption and switching to alternative energy.

In this case, Russia will have much more to spend NWF funds, including for the maintenance of the exchange rate, and balance the budget. As considers the head of “Union of businessmen and tenants Russia” Andrey Bunich, estimates Deutsche Bank is still very optimistic.

If the government does not start to take urgent action, all volumes national welfare Fund may be exhausted not through two, and by the end of this year. Then the country’s financial system will be threatened, and the government risks defaulting on social obligations or will be forced to resort to such a radical step as the removal of deposits.

The Deutsche Bank forecast is conditional, as it does not take into account many factors, the economist says. — First, it is unclear what share of the oil market will be Russia, even if the price will rise. It may be that after the shock of decline in demand prior to the current lows, it is still not restored.

Countries such as China, India, Japan and Korea, not to mention Europe, will try to reduce its dependence on oil. Limitations related to the environment, may become more severe, they will try to replace the oil more clean energy. And since they will not continue to increase consumption, market structure can change dramatically and there will have someone to push.

Americans are already self-sufficient. Before the import they have exceeded exports, but now this situation may change. They will try to replace the volume only by their manufacturers with duties and any other measures. All of North and South America has excess energy. Remains the struggle between Russia and Saudi Arabia for a shrinking markets in Europe and Asia. Some of these markets we can “ask”.

The second important point is that the price of oil for a really long time may be low. Now in American and world store will pour as much as you can, reserve even the volumes in the wells, so that the formed reserves for at least six months. This huge overhang will put pressure on the market and to regulate it. Expect a sharp rise in prices is not necessary.

Based on this, we need to prepare for low prices. Even if they grow up to 30 dollars per barrel, taking into account the decline in exports, it will be the same as the current 15. But that’s not all, Deutsche Bank in its forecast does not take into account many other circumstances.

— They are cunning, when I write, I give an Outlook “excluding the effects of coronavirus on economic processes”. But this is a very serious clause. Coronavirus is the most important phenomenon in the oil market associated with the financial crisis and the great depression that was sweeping the world. To ignore this important fact in the financial review impossible.

We see that only for a few months this factor had an impact on the Russian budget by five trillion. Until the end of the year, the amount of loss may reach 10 trillion rubles. We are talking about large-scale loss of taxation, in particular, met. The construction of our tax system is such that in present conditions we can practically get nothing from the oil and gas revenues.

Other taxes will also fall, but it will increase expenses and compensation to all those affected by the crisis. Will have to help large and medium-sized businesses, to citizens, to increase the capital of banks, to plug the pension hole. Current government measures provoke a shaft of non-payments. Write-offs are not implemented, and, therefore, counterparties will accumulate arrears.

By the end of the year will gain a huge amount on rent, taxes, loans, utilities, etc. Now on the bankruptcy moratorium, but many will prefer to simply pay nothing when the moratorium is lifted. All this amounts to trillions of rubles, of which little can be obtained. But will have to write off billions in debts to banks, to households and businesses.

Anton Siluanov said that by the end of the year will be 7 trillion rubles in NWF, but I doubt that will be able to save this amount. In any case, if the price of oil will rise to 60 dollars, this amount, at best, will last until the end of next year. And, it is possible that financial stress we begin to feel at the end of the current year. So the scenario of Deutsche Bank is quite optimistic and does not account for our internal problems.

— The real picture is far worse. If current trends continue, we face the bankruptcy of the budget system already in six months. The government is adrift, expecting that oil prices will rise, and will be something to patch. If they are wrong, but all indications are that it is so, we will face the threat of a collapse of the budgetary system, and eventually the collapse of the financial system.

The threat of an apocalyptic scenario already this year, a very real and serious, so no two and especially six years, we have. Especially if aggravated geopolitical situation and our adversaries will strike at the us with additional attacks.

You should not sit and calculate how much we’ll be able to spend all and to act and dramatically change the policy, but that’s a subject for another conversation.

Technically this may not happen. Siluanov nobody bothers to pretend that there is a SWF and to increase borrowing and the national debt with state-owned banks. Debt for housing will be recorded as future income. Non-payment of taxes may be credited in the credits, but it will be hanging on the banking and tax system.

If all of this can be attributed, as should be done, no seven trillion we don’t have, because all of these write-offs and lost revenue is much higher and can reach up to 20 trillion rubles. By the way, if write-off to start now, the situation will be much better, but they don’t want to do, apparently in order not to worsen the statistics. Let the economy go racing, but on paper the picture will be positive.

This approach can lead to unbalancing of the budget and devaluation of the ruble. Not a controlled devaluation to help exporters and pointless and harmful. Even if the NWF will remain at 7 trillion, at the rate of 100 rubles per dollar it will be a different amount than it is now.

“SP”: — You are talking about the collapse of the financial system, but what it will be, it’s the default?

— External default we can not be, because we have no system of debt. About the scale of the economy, our loans are not great. But if we have the money starts to run low, this activates the work of the printing press and, accordingly, inflation. The problems begin with the commodity content and prices, and the whole system will be a lot of defaults. The standard of living will continue to fall, people will have less income, despite the fact that they have now anything special there. Such processes are accompanied by social consequences, because for a long time, this situation can not continue.

But the default can be in another form. In fact, we already had defaulted on its social obligations. I’m talking about pension reform. Such defaults are possible in the near future in the form of reduced social obligations of the state, refusal of public support.

In addition, now a lot of talk about the possibility of default on Bank deposits. People have a large amount on Deposit, and the government may wish to lay hands on these funds, as it is explaining. So that a default on deposits, in contrast to external default, is possible.