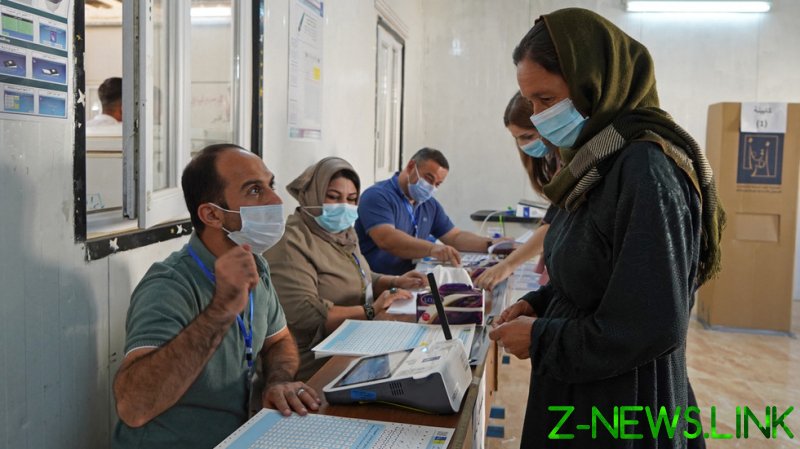 Two years ago, thousands of Iraqis took to the streets to demand an end to corruption, misgovernance and a sectarian political system, imposed by the United States after the fall of Saddam Hussein, that allows for the systematic plundering of the state and its national resources.

The system, known as ‘muhasasa,’ was developed by Saddam’s opposition in exile in anticipation of a post-Ba’athist Iraq and was adopted by the conquering US forces who believed balancing sectarian demands would allow for the creation of a stable political settlement.

But while muhasasa was devised to divvy up political positions and power on the basis of sectarian or ethnic quotas, it has become a cypher for politically sanctioned corruption and the continued enrichment of elites and their followers.

Ministries and state bodies are also apportioned according to factional lines, further enhancing the capacity for nepotism. As such, muhasasa has contributed to the creation of a bloated civil service, whose salaries account for around a quarter of the country’s GDP, as ministries and key administrative bodies trade jobs and contracts for support.

The state currently pays the salaries or pensions of some 11 million people (Iraq has a total population of 40 million), including half-a-million so-called ‘ghost workers’ who don’t work anywhere but still receive a salary. Reports from 2020 suggested that the government was paying around 400% more in salaries than it had been 15 years ago.

Muhasasa was meant to prevent a single faction or ethnic group oppressing others in the way that Saddam had done, but Washington’s masterplan instead engendered a kind of political deadlock, whereby the divided parliament and its precariously positioned prime ministers struggled to deliver, even when they tried. As a result, it was no surprise mass protests erupted in 2019; the system wasn’t delivering.

In May 2020, Prime Minister Mustafa al-Kadhimi came to power in the wake of the protests (also known as the Tishreen or October movement) which prompted the collapse of the previous government. But while the former journalist and intelligence chief seemingly heard the call for an early ballot, he won’t be presiding over wholescale political and electoral reform.

Al-Kadhimi has brought the 2022 election forward to this Sunday and has overseen some electoral reform, but critics, of which there are many, contend this reform doesn’t go anywhere near far enough and may further entrench the US-imposed muhasasa.

Despite some headline reforms, the supposed improvements don’t address the failing system. In a change from the last election, Iraq’s fifth vote since the US conquest will see elections conducted in 83 multi-member local constituencies. Nine of the house’s 329 seats are reserved for minority groups, including five for Christians, and 25% of seats are reserved for women.

The displeasure at the extent of the reforms is manifest in the widespread calls for Iraqis to boycott the election; even those who demanded the vote are split on whether to take part. However, universal abstention is likely to be avoided after Grand Ayatollah Ali al-Sistani, the spiritual leader of the Iraqi Shia, issued a statement encouraging people to come forward and exercise their democratic right, despite the election’s “shortcomings.”

Regardless of the electoral changes, experts and forecasters are predicting more of the same; a divided parliament in which no party comes even close to having a majority. Newcomers from the Tishreen movement could get between 18 and 26 seats, an impressive achievement considering the divided nature of the parliament, but only a fraction of the house’s 329 seats.

So, despite this early election, the question remains: who, if anyone, is going to rid Iraq of this US-imposed system for democracy which has brought only deadlock and corruption. And, after all, al-Kadhimi’s leadership is a product of the power-sharing agreement in which the divided parliament was forced to elect not the best man for the job, but the candidate which was least offensive to all factions. Al-Kadhimi’s successor, unless he continues in the role after the election, will be chosen in the same fashion.

It’s also worth remembering that many Iraqis have never known anything else.

With more than 60% of the country’s population under the age of 25, many are too young to remember the Ba’athist years, a socialist regime which was at first characterized by soaring economic growth but also brutal repression, war and Saddam’s cult of personality. Instead, many Iraqis have grown up only experiencing intense factionalism, associated rampant corruption and misgovernance perpetuated by the US-imposed sectarian political system. For this youth, the Iraq rebuilt by the West offers very little unless things radically change.

To add insult to injury, the US troops which oversaw Saddam’s fall from power and the creation of a new Iraq have still not left the country 18 years after they first arrived on the premise that the Ba’athist ruler had amassed Weapons of Mass Destruction (WMDs). Although, as we all know, no WMDs were ever found, leading some to wonder whether there was another reason for the Western invasion.

Earlier this year, Baghdad and Washington agreed that all US combat troops would be withdrawn from the country by the end of the year. And on Thursday the Iraqi army confirmed that the mission to withdraw about 2,500 remaining US troops had finally begun.

But while Iraq may soon be free of American forces, it is unlikely that Iraqis will be able to shake off an ill-judged political system introduced by the US, which, as nearly two decades has shown us, serves only the few at the expense of the many.