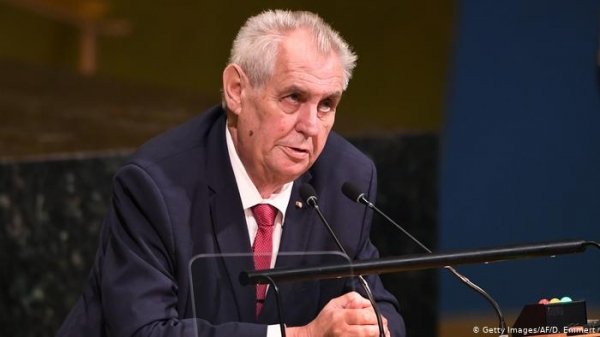 Earlier, the Russian foreign Ministry expressed “disappointment” in the decision of Prague to enter the day of memory of victims of the occupation of 1968. Milos Zeman said that Moscow’s reaction “outrageous.”

Czech President Milos Zeman on Friday, December 27, called “outrageous” the Russian objections to the new Czech memorial day, which will be devoted to the suppression of the “Prague spring” in 1968. Earlier in December, the Czech Parliament adopted a law according to which on August 21 will be the day of memory of victims of the invasion and subsequent occupation of the country by troops of the Warsaw Pact. Zeman signed the law on December 13.

In Moscow, in response, expressed “great disappointment” in connection with the law and plans of Prague. In a statement, the Russian foreign Ministry said that such an approach “contrary to the bilateral agreements embodied in the Russian-Czech Treaty on friendly relations and cooperation” from 1993, in which the parties stated “the desire to finally draw a line under the totalitarian past, associated with the unacceptable use of force against Czechoslovakia in 1968 and further unjustified stay of Soviet troops on Czechoslovak territory.” “The desire of Prague to revisit the events of half a century ago with the aim of incorporating them into modern political context, the reluctance to turn the page of history, which darkens the atmosphere of Russian-Czech relations, hardly will contribute to the success of bilateral cooperation”, – stated in the message of the Russian foreign Ministry, published on 18 December.

In addition, Zeman said that he reserves the right to cancel their agreed part in the celebration in Moscow on the 75th anniversary of the end of the Second world war. View Zeman has surprised the Czech public as the head of the country was previously considered to be Pro-Russian. Zeman joined the Communist party of Czechoslovakia in 1968. Two years later he was expelled from there because of his criticism of the Soviet occupation during the “Prague spring”.