Home / WORLD / The Covid-19 pandemic has taken thought policing and wokeness to a whole new level. And not even RELIGION is sacred any more

The Covid-19 pandemic has taken thought policing and wokeness to a whole new level. And not even RELIGION is sacred any more 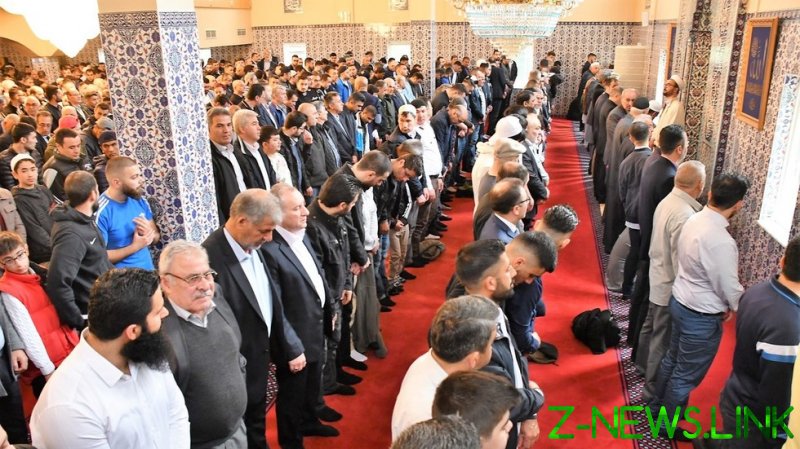 For years now, Western society has been on a slippery slope towards total rejection of the old philosophy of ‘live and let live’. And that slope is a slip’n’slide with a brick wall at the end of it. It was only a matter of time before society slammed into it. There were many exit ramps and flashing warning signs en route, but, as the saying goes, the road to hell is paved with good intentions.

It all seemed to start innocently enough when social justice warriors advocated in favor of tolerance of diversity. Fair enough. What reasonable person wouldn’t have a problem with people being able to live their own life as they see fit, as long as it didn’t impede on anyone else’s?

The only real confusion was that by focusing on the kind that’s based on appearance or traits that individuals can’t control, these activists limited their mission to increasing only the most superficial kinds of diversity, which is in itself a form of discrimination against the very people for whom they purport to advocate. These militants effectively reduce people to one-dimensional figures by underscoring the kind of traits that are only visible on the most cringeworthy dating hook-up apps while negating the kind of diversity that is unseen and far more deep. But society ultimately conceded to their worldview, which served only to embolden them.

The next step was to advocate beyond simple tolerance in favor of the policing and rejection of any thoughts that diverged from theirs. It was the view of social justice warriors that everyone should be able to call themselves what they wish – he/him, she/her, ve/ver, xe/xem, ze/hir, (f)ae/(f)aer, etc – and have the right to dictate how others view them. Those lacking the bandwidth to wrap their minds around this new language system have been able to sidestep it by simply referring to people by their name, for example. But it was the beginning of the emergence of two parallel languages and cultures, and, ultimately, social segregation, with one for the “woke” and their sympathizers, and the other for the traditionalists.

More recently, the push for diversity has even reached realms that are by definition traditional in the strictest sense. Literally nothing is sacred anymore, not even religion. Earlier this month, a theologian of the Church of Sweden, who may or may not be a woke millennial, suggested that Christians could accept Prophet Mohammed in the interests of greater respect for Muslims, apparently seeking to treat centuries-old institutions like they’re a Marvel/DC crossover akin to having Spider-Man and Superman team up.

So, where is all this leading now? It’s pretty obvious. The Covid-19 pandemic has taken the militant policing of others’ thoughts and behaviour to a whole new level. Anyone making their own decisions about their life amid this global fiasco has been shamed for wrong-think, in a page taken straight from George Orwell’s ‘1984’, written in 1949, in which a character is executed for thoughtcrime. It’s not uncommon for workers nowadays to be fired from their jobs if the company feels the individual has violated what it considers to be proper conduct in the Covid-19 era. It’s not quite the same as Orwell’s imagined punishment by ‘vaporization’, but we seem to be getting there. Woke citizens who are completely intolerant of anyone whose views and behaviour diverges from theirs amid the pandemic are already in hysterics over people choosing not to wear face masks or electing where to wear them, or opting to go about their daily life as normally as possible.

Now we’re starting to see these same militant sanitary authoritarians wanting to dictate to others whether they should be forced to be vaccinated. And governments are playing along, with several nations evoking the notion of vaccine passports for travel or simply to enter certain indoor venues. UK Prime Minister Boris Johnson, for example, has raised the possibility of British pub owners having the option of reserving the right of access to their establishment to those who have been vaccinated against Covid-19.

Similarly, it appears that even higher education may soon be something reserved for the vaccinated class, with Rutgers University in New Jersey setting the tone for the next school year by requiring that students be vaccinated in order to attend.

Will others follow suit? How about mass transit, gyms, libraries, restaurants, movie theatres, shopping malls, swimming pools? Are we currently witnessing the beginning of the segregation of society based on vaccination? If so, it’ll be to the detriment of anyone skeptical about turning their body over to Big Pharma lest they find themselves barred from what most would consider normal life.

Yet there are people cheering for exactly that. The mere thought of people who think and behave differently to them is intolerable. The authoritarian policing of other people’s lives – the sort of extremism that used to be relegated to science fiction – is now nearly a fait accompli. And authoritarian wokeness disguised as benevolence is exactly how we ended up here.