The coup didn’t take: Socialists’ victory in Bolivia shows more unity than foreign meddlers would like 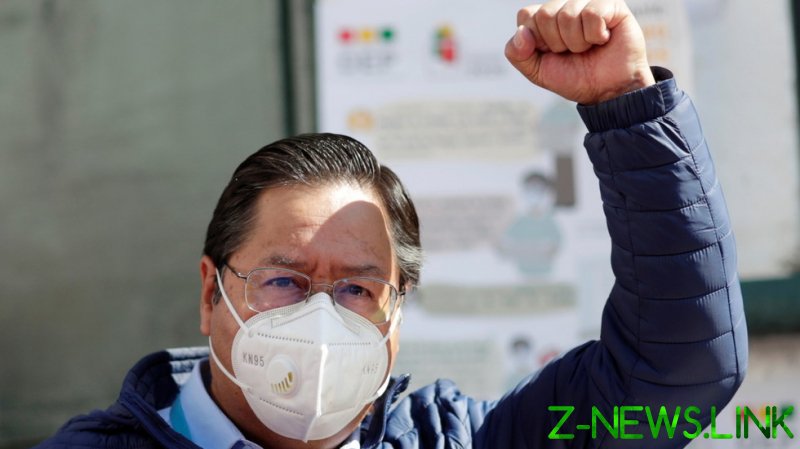 Despite all odds, the Movement for Socialism (MAS), the party of former President Evo Morales, appears to have won Bolivia’s election outright in the first round. Preliminary results show that MAS candidate Luis Arce won the presidency and the party also won the congress soundly. Nearly a year after an unelected US-backed coup, led by Jeanine Áñez (who has already congratulated Acre on his victory on Twitter), the Bolivian people have reclaimed their democracy and are poised to consolidate power against the forces of neoliberalism stronger than ever before.

Arce, the 57-year-old former minister of economy and public finance under President Morales, was one of the architects of the Bolivian economy – what was once called the “Bolivian miracle.” During the Morales administration that he served under, gross domestic product (GDP) grew from about nine billion US dollars to over 40 billion, per capita GDP tripled, other key financial and monetary figures were wrangled in favorably, but most importantly, extreme poverty fell from nearly 38 percent to 15 and moderate poverty was nearly halved.

Nationalizing hydrocarbons was the main contributing factor to this explosive economic growth, which was a major step after the neoliberal government exit in 2006 and Morales and the MAS took power. No longer were multinational corporations allowed to trounce Bolivia’s working class to extract resources for a pittance – they belonged to the people, according to the MAS government.

“Our economic model works in a simple way: we use something that nature has given us. With neoliberalism that wealth was in the hands of multinationals. We nationalize to have a surplus that is distributed in two phases: reinvestment for an economic base and, on the other hand, the redistributive part of income,” Arce said to DW in 2019, explaining the country’s economic success.

While to the casual observer this may look like a red takeover of Bolivia (The MAS is, after all, an unapologetically socialist party), there was no forceful expropriation. That is to say that the MAS’ nationalization project was peaceful and more of a reform program, rather than a violent seizure of the means of production. This is more or less indicative of the party’s entire program up to this point – militant in its language, but diplomatic in its approach. It was this strong-spirited push toward Bolivian socialism – one with a human face – that created a time of unprecedented political stability in the country.

Bolivia for the past year has been almost unrecognizable in terms of its economic program and civil society – fraught with turmoil, unable to provide food or basic necessities for its people, broken, corrupt and outright dysfunctional. The coup government of Jeanine Áñez, run by military leaders and not a pluralistic civilian leadership, only served to expose Bolivians to what lies ahead should they abandon the path of Bolivian socialism.

And this is the importance of Arce’s first-round victory: the MAS’ victory in 2020 is more than just a return of Evo as the Western news media has claimed, it’s the consolidation of the project he stands for into something more lasting. It shows that the coup was not a hidden cleavage in society brought to the fore, but rather a temporary setback against an otherwise steady movement.

Áñez and the coup regime have brutally suppressed people-led organizations and the left in general. Many innocent people have died or been imprisoned and surely these wounds will be open for generations, but this violence has only hardened the resolve of actors within civil society. This is a generation of young people like Orlando Gutiérrez, the leader of Bolivia’s minor union, Andrónico Rodríguez, MAS senate candidate and campesino leader, as well as journalists like Ollie Vargas from Kawsachun News.

This week will be crucial in determining the future of Bolivia. The bad actors that took power in Bolivia and their puppet masters pulling the strings from afar have surely not thrown all their cards on the table and nothing should be trusted until the day power is formally handed back over to the people. Serious questions remain about the official election results and the peaceful transition of power, although Añez appears to recognize that Arce has won.

But if indeed democracy is strong in Bolivia, as the coup regime has insisted, then all signs point to the MAS taking power once again and this time with a stronger mandate than before.

To be sure, there will be many new challenges facing President-elect Arce; for example, how to deal with the coup plotters or whether to honor contracts signed under the coup regime. These decisions will garner attention from Washington and could land him pressure, especially if US President Donald Trump wins re-election. But with a strong internal mandate, Arce would not be inheriting a broken and divided country, but one probably much more unified than last year.

Bolivia’s against-all-odds victory against neoliberalism is indeed an optimistic glance to the future and is yet another example of how the world has shifted into a multi-polar, decentralized power balance. Washington, who the International Monetary Fund (IMF) has officially recognized as the world’s second largest economy behind China in terms of Purchasing Power Parity (PPP), is steadily losing its battle against the ever-unifying forces of decolonization.