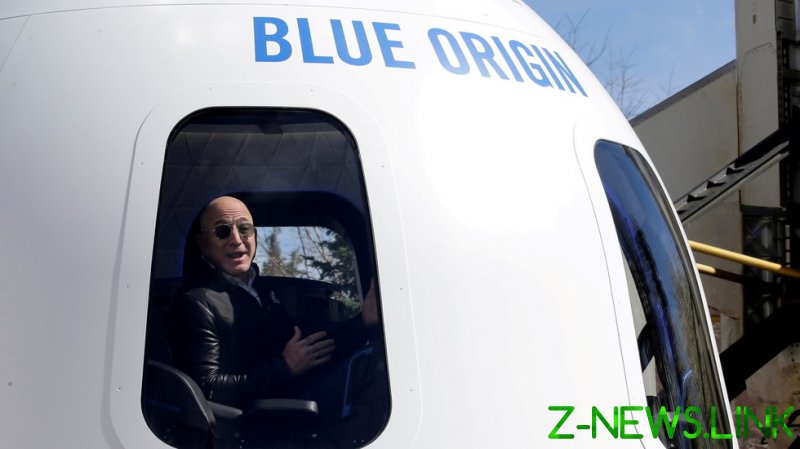 The former Amazon CEO will make an 11-minute excursion to the edge of Earth on board Blue Origin’s New Shepard spacecraft. Bezos founded Blue Origin in 2000 with the aim of using some of his vast fortune to develop rocket technology for commercial purposes. It won’t be a solo trip, though: Bezos will be joined in the space capsule by his brother Mark, 82-year-old pilot and female aviation pioneer Wally Funk, and an 18-year-old physics student named Oliver Daemen, whose investment firm-owning father paid for his $28-million ticket.

If all goes according to plan, the launch time will be 9am EDT (1300 GMT). For those planning on hosting a pre-launch party, Blue Origin’s livestream will start at 7:30 am EDT (1130 GMT).

The company released a video on Sunday detailing the “meticulous & rigorous launch program” that paved the way for Tuesday’s flight. New Shepard has already flown 15 unmanned, automated test flights. The successful trials prompted Bezos to announce in June that he would be on the spacecraft’s first crewed flight.

Designed to take off vertically from a launch pad, New Shepard is capable of short but high-speed joyrides, providing passengers with brief moments of weightlessness as they zoom more than a dozen miles about Earth’s surface. The craft reportedly reaches speeds of up to 2,300 mph – about three times the speed of sound – perhaps making it difficult to snap photos of the panoramic views of our planet.

While the flight undoubtedly marks an important milestone for commercial spaceflight, Bezos was out-rocketed by fellow super-rich guy Richard Branson. The Virgin Galactic founder was among the six people who crewed the maiden flight of his company’s Unity 22 spaceplane on July 11.

The flight was successful, but there is debate about whether it actually counted as a true visit into space. The aerially launched craft did not pass the Karman line, considered to be the boundary between Earth and space at 100 kilometers (or about 62 miles) above sea level.

Despite the technicalities, Bezos congratulated Branson for his achievement after the flight and said that he couldn’t wait to “join the club” – presumably the Society of Billionaires Who Have Traveled to Space.

Both men appear to be eyeing cosmic profits that could come from space tourism, although it remains to be seen who can conquer the extraterrestrial market first.