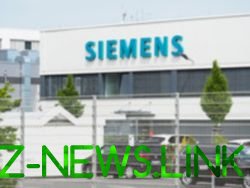 The contract between JSC and LLC “TOS Varnsdorf-RUS” was published on 27 October. The document States that the CNC machine is designed for high performance and precise handling of heavy and bulky items. The machine can process steel and cast iron, including cast and alloy, non-ferrous and titanium alloys. Obligatory condition of the delivery stipulated in the contract, “as the CNC system should be used system Siemens Sinumerik 840 D s1”. The interface must be Russian.

The deadline of delivery, the settings of the machine and staff training on the “Star-gear” – December 30, 2017. To ship a car to the address: St. Petersburg, Tallinn, 7K.

The supply of Western equipment for the shipbuilding sanctions similar to the situation with the supply of turbines by Siemens in the Crimea in July 2017. To cancel the delivery through the Russian court, the German manufacturer could not.

“Star gear” is a subsidiary of machine-building plant “Zvezda”, which is actively working with the companies under sanctions of the state United shipbuilding Corporation (USC). Only in 2017, “the Star” put the equipment at Sredne-Nevsky shipyard, part of the USC and on the 13th shipyard black sea fleet in Crimea. In addition, the “Star” is now creating a center of domestic reductionstrategy, which will create the ship gear instead of overseas, and “Star-gear” – part of this process.

USC and the Russian shipbuilding industry is under sanctions by the US and the EU from 2014. Including restrictions imposed for the supply of high-tech equipment – machines. JSC “Star-gear” created on the “Star” for various times import substitution is the creation of ship gearboxes that previously Russian companies bought in Ukraine. For the production we purchased machine tools manufactured in the West – Hoshulin, Hoffler, TOS.