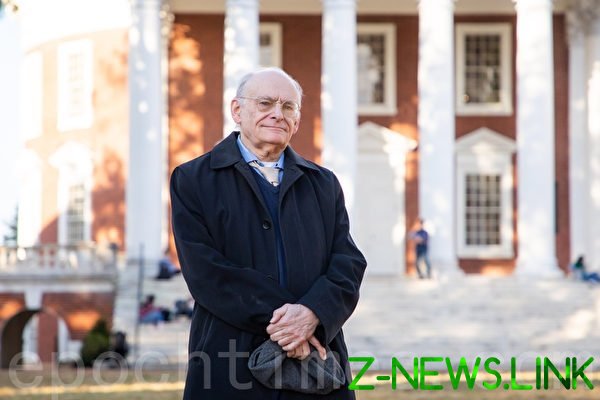 David Matas graduated from the University of Oxford, is engaged in private law practice in the field of the rights of refugee, immigration and human rights.

The Matas received the 2009 Prize for achievements in the field of protection of human rights from the International society for human rights (IGFM), in 2010, nominated for the Nobel prize.

In an interview with Matas is considering to press charges to the government of China from the point of view of criminal and civil law, and offered specific legal procedures.

Reporter: What was your first reaction to the pandemic virus PDA (COVID-19)?

The Matas: the Communist party of China (CPC) appreciates only a political reputation. CCP thinks not about how to solve problems, and how to save face. She continues to hide the truth, what the problem is amplified.

Exactly what the CCP does, when we are talking about extracting organs from living people and when the SARS epidemic was also. As for the Wuhan epidemic, its emergence and spread, the first reaction of the CCP, in my opinion, reflects the typical behavior of the Communist party.

In the last few years, we still saw a glimmer of hope. I’m talking about the problem of extraction of organs from living people. When David Kilgore first published report, only two of us participated in the investigation of this case. Now more people oppose the illegal activities of organ transplant in China.

But even in this case, the power is still unequal. This wave has not yet reached the proper level — the level of intergovernmental cooperation. The reason is that we are the country that has geopolitical, economic, and political power.

They (the authorities of the CCP) not only in China use all opportunities to maintain stability, they are propaganda on a global scale. Put pressure, intimidate, use economic and political leverage to hide the facts, deny and distort the truth, mislead. Many for political and economic benefits decided to unite with the Communist party of China and just go with the flow.

The lesson to be learned, we can’t ignore human rights violations anywhere in the world.

Some may think we can ignore the illegal organ transplants in China, because it happens there, and is irrelevant to us. However, the coronavirus virus (CPC) is the result of this way of thinking.

If the countries of the world more actively opposed the illegal transplantation of organs, methods, distortion of facts and conceal the truth; if in this area at the beginning of the world has insisted on transparency and the introduction of the accountability system; if at that time the Communist party of China has faced global pressure and would be forced ultimately to make the system transparent and accountable, then we would not now pandemic coronavirus.

Ignoring the criminal organ harvesting from living people, we are faced with the consequences.

It can be assumed that the CCP intentionally released the virus, but after the virus began to spread, she chose to “deliberately turn a blind eye”. We can say that the whole world “blind eye” on your PDA. Now we are reaping the bitter fruits.

Correspondent: I remember, over ten years ago, probably in 2008, you told me that preparing for the “Nuremberg trials” against members of the Communist party.

The Matas: I think it is important that the perpetrators of human rights violations carried criminal responsibility crime of omission — one of the elements of the crime of criminal law.

Such medical disputes and medical problems met in the Nuremberg trial of Nazi doctors. Many of the defendants said they did not know were taken from the bodies and the samples that they were just doing their job. In the end, the Nuremberg court sentenced some doctors to the death penalty on the grounds that they deliberately “turned a blind eye”.

The court held that the reason for their ignorance was that they didn’t ask questions, they were all the same, they could learn the truth if you tried.

I think it is also relevant to coronavirus: the authorities are concerned about is not what happened. They don’t care about the incident, and only then, will it affect the stability of the Communist regime. They refuse to recognize the seriousness of the problem and solve it. The fact that they deliberately close their eyes, be regarded as an element of criminal responsibility at the international level.

Reporter: US Senator from Missouri Josh Hawley suggested that the bill “Law on justice for victims COVID-19”. From a legal point of view, do you think it’s okay to prosecute?

The Matas: once the law is passed, perhaps. The prosecution, from the point of view of civil liability, it seems more difficult because it affects the immunity of the state. But criminal responsibility is not a matter of principle.

Now any country with a universal jurisdiction allows prosecution for crimes against humanity, regardless of who you are and what your nationality, as long as this man (the defendant) is located on the territory of the state, it can be brought to justice. So it is possible.

In civil proceedings there is the problem of sovereign immunity of the state. If the bill passes in the US, this problem can be circumvented. In Canada and other countries have a law whereby the countries that support terrorism could not enjoy immunity.

I think PDA can be attributed to such countries. It is obvious that the coronavirus caused panic throughout the world. The Communist party is deliberately “turned a blind eye”: when the virus began to spread, and even once caused panic. I think that the actions of the CCP meets the definition of state terrorism.

Reporter: What do you think about Taiwan?

I believe that we must first realize that in the process of working with China on health or any other issues if they relate to the Communist party, to trust them not to be.

In addition, we saw a systematic approach: comprehensive testing and observation, social distance and so on. Society can resist the virus and not be completely paralyzed. To achieve this, Taiwan does so, cases there a little bit. So I think they are a good example.

Reporter: How can we learn the successful experience of Taiwan?

The Matas: We must be wary of the medical system and government of China, we should not trust their data. Today I heard that the death toll they have increased by more than a thousand, what hardly happened overnight. I think their information is fabricated.

Reporter: looks Like we need an international strategy to take action against the CCP.

The Matas: we Must understand that it (CPC) is that its purpose of propaganda is to present yourself in a favorable light. The Taiwanese immediately saw through it, because they are already familiar with the behavior of the Communist party.

I guess many all the same decide that the statements of the authorities in some issues, might be loyal. Of course, there’s always a probability of a match. They may be right. But regardless of right or not, it serves the propaganda purposes of the Communist party of China. I think that people need to know about it.

Do you encounter with Communist China propaganda machine. Any information you receive should come from a third party, independent from the CCP. If we want to protect ourselves, we need to realize that.

Reporter: Following your suggestions how we can hold them accountable for this catastrophe?

The Matas: There are many different possibilities for lawsuits.

I think we should use existing mechanisms. Because in most countries it is possible to charge the Chinese Communist party is a crime against humanity under the system of universal jurisdiction.

You can also initiate a bill similar to the “Magnitsky act” to directly impose sanctions against government officials and add them to the blacklist. We have such laws in Canada, the US and the UK. I invite the government to initiate such a bill.

As for whether any of the offenders add to the black list, it can be left to the discretion of the government.

We asked the canadian government to make the black list of those who have committed crimes associated with organ transplantation, but the government has not yet taken action. The same applies to the case of the virus, we must ask the government to create a blacklist. It does not require legislation or regulations. If the government wants to, can do it tomorrow.

What did the Taiwanese, can be done by anyone and anywhere: publish information on the epidemic and take preventive measures. The Taiwanese are very experienced and they understand the danger of the epidemic. This has led to very different results in Taiwan.