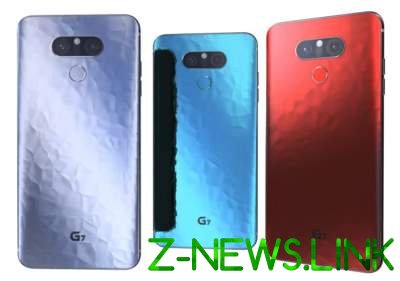 According to rumors, the basis of the device will serve until officially announced Qualcomm Snapdragon processor 845.

On the website YouTube published a video (see below), showing what may be the future flagship smartphone LG — camera, appearing now under the name of G7.

Need to mention that the device shown is only a concept, which was based on unofficial information published by the network sources lately. Real device, of course, will differ from the 3D model. However, the video gives an idea of the key features of the product.

According to rumors, the basis of the device will serve until officially announced Qualcomm Snapdragon processor 845. Its membership will include eight processing cores, high performance graphics accelerator Adreno 630 and cellular modem LTE X20 to work in today’s mobile networks.

The LG screen G7 is supposedly almost 90 % of the area of the front surface of the device. Above and below the display are speakers. Indicates the presence of the symmetric port of the USB Type-C and a 3.5 mm headphone Jack.

On the back side of the case has dual main camera. In addition, the back will be installed fingerprint scanner for fingerprinting.

The official announcement flagship smartphone LG G7 is expected in the first quarter of next year. While it is possible to evaluate the concept design of the future system: