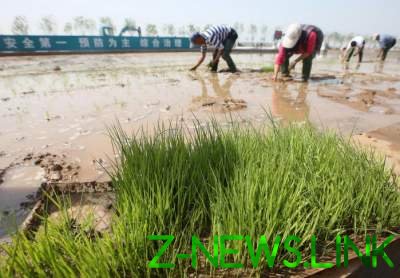 Investigated 200 different types of grains to achieve that best grow in a salty environment.

Scientists in China have developed several types of rice that can be grown in sea water, potentially creating enough food for 200 million people.

Researchers have tried to grow corn in salt water for decades, but only now have developed varieties that can be commercially viable.

The rice was grown in the field near the coastal city of the Yellow sea in Qingdao in the Eastern Shandong province. Investigated 200 different types of grains to achieve that best grow in a salty environment.

Sea water was diluted, and then sent to the rice fields.

It was expected that the scholars will receive up to 4.5 tons of rice per hectare, but the crop has exceeded expectations, and in one case have been collected to 9.3 tons per hectare.

The test results significantly exceeded our expectations, ‘ said Professor Lucy shearing, Professor, University of Yangzhou, which is involved in the project.

In China there are a million square kilometers of land where yields are not rising due to high salinity. Scientists hope that the development of new rice will allow some of these areas are used for agriculture.

If even a tenth of these lands were planted with rice, they could produce 50 million tons of food. This is enough to feed 200 million people, and increase the rice production in China by 20 percent.