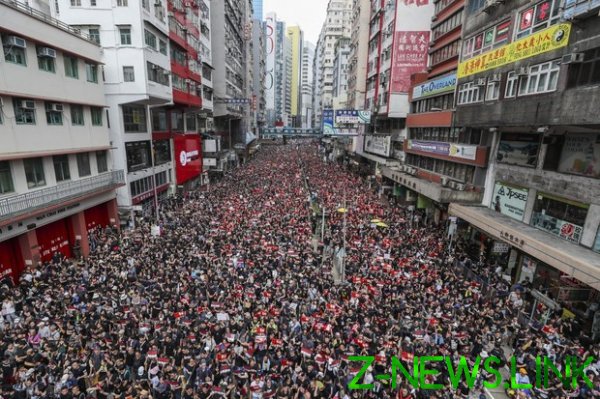 The Chinese government is the question – to suppress the protests in Hong Kong, or to make concessions? Judging by the armoured personnel carriers that accumulate near the border, they are preparing for a “strong move”. Still, it’s stupid, which were smart enough to avoid.

The crisis had some time to start. The conditions under which Hong Kong was handed back to China, demanded that the special status was maintained for fifty years. Unlike ordinary Chinese, in Hong Kong there is freedom of speech, censorship and unlimited access to the Internet, and the opportunity to participate – with restrictions – in the elections. Protests 2019 was originally caused by the fact that the Chinese government slowly but steadily is transforming the enclave with special conditions in part of the normal, unified China. From the very beginning were large and powerful, and after the first reaction with batons and tear gas, have become large-scale. (Of the 7 million inhabitants, one of the protests left a million – approximately one third of the adult population.)

In many revolutionary situations, there is the question of authority to suppress protest or not? During the Russian revolution a hundred years ago, the authorities had met several times to suppress and never could. Neither Yanukovych, who has tried nor Mubarak, who try seriously failed, failed. Maduro managed to fight back, preserve the status quo. But in the Hong Kong case, the issue is not – by any military force, the protesters do not have. No serious resistance they to be able to. What restrains, for the time being, the Chinese authorities?

Twenty years ago, when England passed an enclave of the Chinese government, Hong Kong’s GDP was almost 20% of China’s GDP, a significant value. Now this share is less than 3% and, therefore, direct economic effects can be neglected. However, Hong Kong is more important than its share in GDP. In many ways, this is a dream brought to life, for hundreds of millions of Chinese, at the same time the pilot and lighthouse for the vast country.

The crackdown, which, judging by the passions, will lead to the deaths of a number of protesters, arrests of thousands of ships over hundreds of participants will be – in contrast to the bloody crackdown in Tiananmen square thirty years ago – shown on television throughout the world. (Government of China care what I think in the “big world”, but more importantly, what do you think, for example, in Taiwan.) Show hundreds of millions of its citizens, ends than normal aspiration to the dream – a rich, beautiful, healthy life – and make the desire a little weaker. Growth will slow down.

That is a question for the Chinese government now is – you can make concessions. Perhaps, this will delay full integration of the enclave to China forever – the next generation will also protest against the following integration steps. And it is possible to suppress the protest, hoping – erroneously, in my opinion – that this can be done without sacrificing economic development. I hope that the Chinese leadership is afraid that another ship “will sink before entering the harbour.