Home / Society / The children ate dog food, while the mother was drinking with a neighbor

The children ate dog food, while the mother was drinking with a neighbor 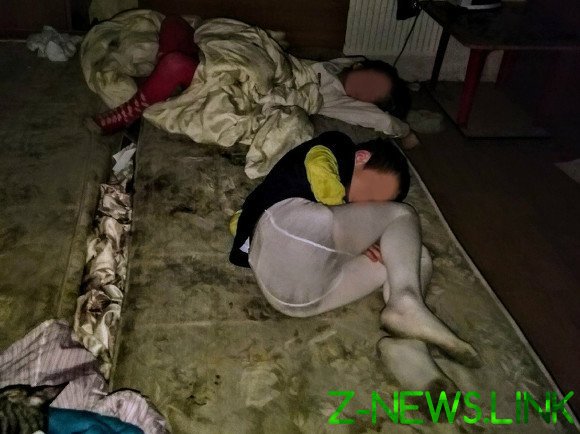 Hunger, lice, cockroaches, bedbugs and the mother is an alcoholic. History of the St. Petersburg children living in inhuman conditions.

In one of the apartments North of the capital of four children for a long time hungry, not go to school and were beaten. And, in principle, could simply die. The first sounded the alarm a friend of their mother, Natalia Martsinkevich. “Rosbalt” asked her to elaborate on what was happening in a dysfunctional family.

It should be noted that Martsinkevich familiar with the parent for a long time. She literally found her when she was 10-11 years old. Being adopted from orphanage a child, the girl ran away from foster parents and lived on the street.

“She began to tell me why afraid to go back, saying that over her house bullied, raped in the garage. However, she could invent. First two days stayed with me. I washed it, fed. Then went to deal with her foster parents. They were very decent people”, — says Natalya.

Martsinkevich had contact with the girl and was aware of what was happening in her life. However, he never visited her. Until many years later, she suddenly wasn’t invited Natalia home.

“She said that her boyfriend died, and now she is hard and scary. Complained that his feet hurt. Asked to stay with her, to help a little. I arrived and saw what was going on. Open the fridge, there is a bucket with a bunch of frozen cockroaches in the water. And some cockroaches — nothing,” she says.

The money from a large mother was. Another thing is that she spent very peculiar. So, once got 60 thousand rubles, and left the house. Later it turned out that the woman paid for the training in the driving school. This is no machine she had — she was going to start on it to be postponed.

Another example of spending a large mother — in buying a puppy cane Corso for 25 thousand rubles. It’s his feces we see on the beds next to the children.

Ironically, it was the dog “helping” children not to starve.

“In the early days I noticed that Sasha eats dog food. I was shocked and asked what was the matter. I was told that everything is normal, nothing will. But the child and without that is constantly sick,” says Natalia.

The apartment had four children. The eldest daughter Nastya — about 11 years, son Sasha — 10. He’s disabled, can’t hear in one ear and speaks very little. There are Alice and the youngest girl, Vicky, is 6 years old. According to Natalia, the little girl did not speak and only grunts.

Except they had two more children. The first died in infancy, when the mother fell asleep on it. The second girl was taken away after the hospital, the mother hit her head on the floor.

“The doctors made a remark to her: “be Calm child, why is it you cry all the time”. Then she freaked out and threw it on the floor. Now baby, if I’m not mistaken, about fifteen years. She lives in America she was adopted”, — said Natalia.

After Natalie began to ask the mother why she did not feed the children and drives them to school, between the beginning of the conflict. As a result, the parent no longer apply to her friend for help. Leaving the house, she shut the door to the room with the children. Once Martsinkevich heard voices outside the door and went in. Youngest daughter was on the balcony and could fall down. Natalia quietly walked up to her and took her in his arms.

The next day almost did not happen, another tragedy.

“She’s got the money and went to evening walk, but we did not say anything. I hear that somewhere a child is crying. Turn around, and inside the washing machine sits Sasha. It is very flexible and loves to crawl in there. We banned him and closed the machine. But this time he climbed, and his middle sister slammed the door. I open and he was already turning bluish. And scream he can’t, just grunts” — describes the situation Martsinkevich.

The assistance of Natalia parent reacted harshly. Forbade their children to eat what she gives them. And if they break its ban, the mother beat them and locked in the room.

“How could I not feed them? Sasha fainted two times. All the children had lice, several times I consumed them” — said Natalia.

In the end, a parent asked Natalia to leave the house. However, the woman cheated, saying that now they’re being renovated, and she can’t leave. According to her, she wanted to live in an apartment as long as possible to trace the development of events. She spent in this family for about four months. During this time the children went to school not more than two times, and the younger daughter Vicky only once visited the kindergarten. Secretly Martsinkevich continued to feed the children.

Representatives of social services not too interested in the situation.

“I ask, “And the team come to you?” She says, “They call me, they say that will come. I quickly tidying up, and children walk send“. The team come — all clear, no kids — not to blurt out the excess. While I lived, none of them came. Although I called and warned to look at that family. But they said that came, and all she was OK. I kept saying to them: come without a call. For example, Friday evening or Saturday. When she was drinking with a neighbor,” says Natalia.

After the hype in the media, the children still took. And in the apartment, according to Natalia, settled in new tenants — drinking family with a small child. Apparently, the mother became bored again and anxious and wants company.

“I now many up in arms. Condemn. Saying I did a bad thing, and now because of my children came to the orphanage. But I say to them — first find yourself in my shoes and then throw. For many I’m the bad. But I know that they are in the orphanage will not go. Them after the hospital takes a family out of the city. Now families are not separated,” says Marcinkiewicz.

Currently, the Investigation Committee shall verify on the fact of publications in the media about the shocking story. She will have to establish all the circumstances of the incident. Actions of officials carrying out supervision and monitoring of family promise, in turn, to give a principled assessment.