Home / policy / The chief obstetrician of Ministry of health acquired the property on 1 billion.

The chief obstetrician of Ministry of health acquired the property on 1 billion. 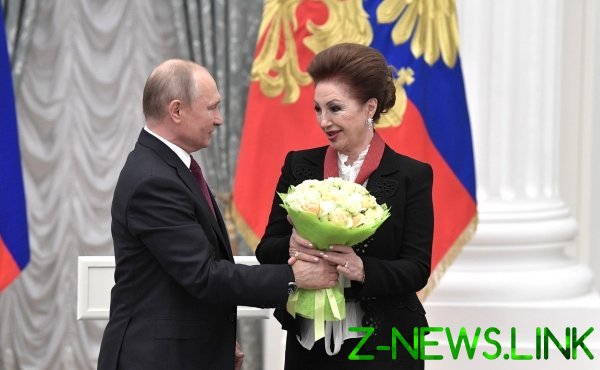 Chief obstetrician-gynecologist of the Ministry of health Leila Adamyan and her daughter have become owners of real estate in the center of Moscow, found The Insider. The purchase of expensive objects coincided with the alleged pregnancy of Alina Kabaeva, which, according to journalists, gave birth in a Metropolitan medical center under the supervision of the zoo. The Insider is not found, government revenue sources, which could explain the sudden enrichment.

On the alleged birth of Alina Kabaeva in may last year, has published an article, the website of the newspaper “Moskovsky Komsomolets”, but the material soon disappeared from the pages of the publication. Representatives of the Russian authorities refused to comment on the report, noted “Voice of America”.

The British newspaper Daily Mail wrote that before placing Kabaeva in a Moscow medical center the entire floor has been freed from the other patients. Meanwhile, the Russian journalist Sergey Kanev, citing its sources reported that Kabaeva “gave birth to two boys.” According to Caneva, the delivery took place on may 7 last year at the National medical research center of obstetrics, gynecology and Perinatology V. I. Kulakov, “has Brought Soshnikov, sniffed every corner, half of the staff got kicked out of the maternity ward. The baby was delivered by some well-known luminaries from Italy, and assisted him Director of the Center academician Gennady Dry”.

In the same Center is working and Leila Adamyan, chief obstetrician-gynecologist of Russia. May 23, 2019, after a couple of weeks after the expected date of delivery, Vladimir Putin awarded Adamyan with the order “For merits before Fatherland” II degree.

In the same year 2019, as found by The Insider, Leila Adamyan bought non-residential area 774,6 m2 in the house № 15 on Bolshaya Yakimanka street (LCD Mon Cher). Possession of the chief midwives of the country is located on the ground floor is designed for offices and commercial premises. At the moment there is a network of studios of nail N. A. I. L. S Russia, a Banquet hall in The Great Hall of the Moscow salon furniture Henge and Atelier tailoring men’s suits Tailor Suit.

One square meter commercial area in the Mon Cher is worth 1,068 million. Accordingly, the market price of real estate Adamyan — around 827 million rubles. On the surrender of land based on rates for hire, she can earn about 66 million rubles a year.

However, judging by the fact that Adamyan was opened in The Great Hall, it was this space for events (weddings, receptions, etc.) and operates on the object that she owns.

In addition, according to The Insider, an extract from Rosreestr, apartments in the same club house has acquired the daughter of a midwife Agnessa Osipova. It owns 266,4 m2 cost (at the price of 750 thousand rubles per square meter) to about 200 million roubles.

Thus, the total value of the property Adamyan and her daughter Mon Cher more than a billion rubles. The shopping area was purchased by the midwife in January 2019. At this time, Alina Kabaeva — if you believe the information about her birth had to be about five months pregnant. Apartments Osipova bought in June 2019, after the expected birth.

Despite his advanced (age 71) age, Adamyan is a practicing physician. On specialized websites you can find such feedback on her work: “Leila V. was credible, was friendly and carefully for those 5 minutes that I allocated”, “Leila Vladimirovna — a doctor from God! At the same time beautiful, intelligent woman, with an incredible energy”. There are, however, negative comments: “the Doctor does not answer questions, because it is already waiting for the next patient. Money thrown to the wind”, “Adamyan takes every day. I arrived very early from out of town to get to her. Fourth. But she Adamyan was late for 3 hours. People resented the dismissive attitude, some just left.”

The daughter of a midwife Agnessa Osipova heads the production of ice-cream “Baskin Robbins” in Russia. The proportion in this business was given to the family 10 years ago and inherited in a legal dispute with his first wife who died of the Director of the enterprise Yuri Abrahamian.

Could Adamyan and Osipova to afford the purchase of expensive real estate on the income from the production of ice cream? Unlikely. According to FTS, the net profit of JSC “BRPI” (legal entity “Baskin Robbins” in Russia) last year amounted to a total of 31.8 million rubles. The most successful in recent years has been for the company 2017 — 47 million rubles. In addition, the business belongs to the family of the midwife is not fully.

Have Adamyan and Osipova and other assets but they are less profitable. OOO MC “WORLD” (gynecological clinic) earned just 8.4 million rubles for the year, and OOO “Gynecology 2000” and “Innovation” have zero income. Also Osipova heads of JSC “ice cream Riteyling” with an annual profit of 6 million.

Agnessa Osipova is known not only as the daughter of the zoo and the face of American ice cream in Russia, but also as a confidant of Sergey Sobyanin. However, to underestimate its contribution to the victory of Sobyanin on elections of the mayor hard: a propaganda video on YouTube with the part of the zoo at the time of preparation of this material scored just 78 hits.

Osipova owned Chevrolet TrailBlazer 2005 release. Adamyan, as it was established, The Insider, moves with the Mercedes-Benz S 450 4MATIC Maybach 2018 release, this car recorded on JSC “BRPI”.

Osipova, with her children also belongs to a relatively cheap apartment (77,6 m2) at the metro station “University” (Leninsky prospect, 74). There are indoor and more impressive: 139 m2 over 60 million in the residential complex “Constellation capital” (Shabolovka, 23). Also, it owns 23 acres in the village of Tagan’kovo Odintsovo district. Leila Adamyan, in addition to inherited from the husband’s inherited apartment on the street Bryansk, owns a mansion in the village of Uspenskoe, Odintsovo district, in the branch of DPK “RANIS” — the cooperative of workers of science and art.

None of the old objects found at The Insider Adamyan and her daughter, before the acquisition of new properties sold was not. So this is the origin of the funds is also excluded. Official income Leyla Adamyan, according to her Declaration for 2018 is 32 million 750 thousand rubles. It is 25 times less than the cost of only one acquired premises in Mon Cher. To find out which funds were purchased expensive real estate and is a sudden enrichment of the physician with the alleged birth of Alina Kabaeva, the most Adamyan failed. “I’m not going to answer any questions,” she said in a telephone conversation with The Insider.

Kabaeva, according to the media, there is another son born in 2015. In the same year, the friends of Putin and Pyotr Kolbin and Gennady Timchenko rewrote the grandmother Kabaeva several luxury apartments.